The BevQ app generates e-tokens that need to be shown at the liquor store to purchase alcohol. 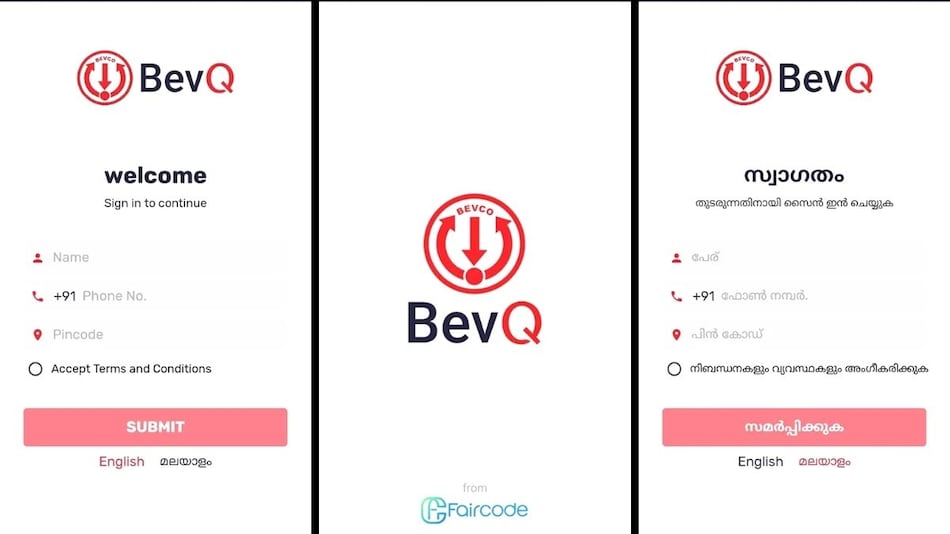 BevQ, Kerala's liquor sale virtual queue management app, is finally available to download via Google Play Store for Android users. The much-awaited Kerala beverages app is provided by Kerala State Beverages Corporation (BEVCO) while it is developed by Kochi-based startup called Faircode Technologies Private Limited. Notably, in less than 24 hours since its launch, the app has been downloaded over a lakh times, Play Store listing reveals. However, many users on Twitter and Google Play Store are questioning the quality of the app - particularly with regards to the OTP generation.

The BevQ app is designed to manage overcrowding at liquor stores amid coronavirus pandemic. Liquor sales in Kerala have resumed starting today.

"BevQ is a virtual queue application and token generator service provided by Kerala state beverages corporation ltd. In order to maintain the social distancing especially in this covid scenario this app will be usable and the client can book a queue number and token for assuring his place in the queue in the specified time slot," the app description on Google Play reads.

How does BevQ app work?

The BevQ app supports both English and Malayalam languages. To use the mobile app, users will need to provide their name, mobile number, and pin code. Customers who place their orders through the Kerala beverages app will first receive an e-token with a QR code on their mobile phone. This token will be scanned by the liquor store licensee following which the alcohol will be handed to the customer.

The BevQ is then said to direct the customers to the nearby outlets based on the GPS location. The e-token carries information such as the district, time slot, address, and QR code.

It is also reported that a customer can buy liquor only once in four days in the state, using the BevQ app. Users who do not have an e-token will not be able to purchase liquor. Additionally, people residing in Red zones cannot purchase liquor or book a slot using BevQ app. E-tokens can be acquired via the SMS method and more information about this expected from the state government.

As mentioned, hours after going live on Google Play store, the BevQ app was downloaded by over a lakh users. However, several users are questioning the quality of the Kerala Beverages app, especially with regards to the OTP generation.

"Worst app that I have ever installed since I started using smart phones. Even after trying so many times, otp is not received," a user on Google Play store pointed out. Another user on Twitter has claimed that the app does not include the "option to choose a slot."

Additionally, several users have stated that the BevQ app directs users to liquor stores located in faraway places. However, several users were also able to book the slots to buy liquor, therefore, the issues could be cropping up as a result of heavy app traffic. Users can download the app via Google Play. It is unclear when the app will reach iOS devices.