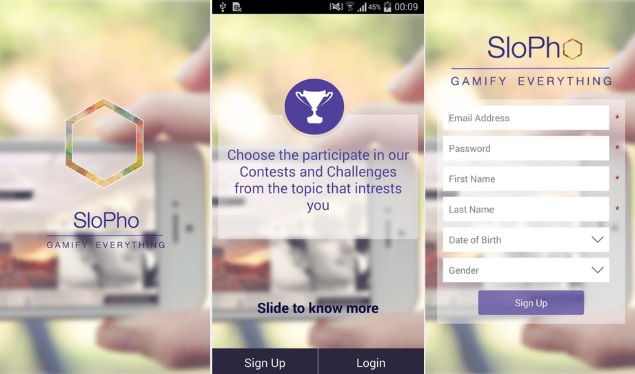 SloPho allows users to win prizes by participating in games, contests, pools and quizzes. Participants also earn points that accumulate on a leaderboard and can eventually be redeemed or transferred/ gifted as prizes or bartered for advertising space on the platform. The cumulative average daily prize money to be won ranges as much as Rs. 25,000 and will go up significantly during special promotions' and festivals, the company said.

Speaking at the launch, Kapil Dev, Co-owner and Promoter said, "With SloPho, we want to give users, corporates and professionals, a social platform that not only fulfils their need to connect and collaborate, but also earn rewards for it in a way that matters most to them."

SloPho also allows businesses to target campaigns by region and language and provides two-way communications. Registered businesses (corporate, SME, self-employed entrepreneurs and professionals) will be able to put up gamified promotions directly and engage users around their brand and proposition to build long term communities, a release stated.

"This social platform is truly for everyone and is our contribution to the Prime Minister's Make in India initiative. Our aim is to take it to every smartphone user, corporate and professional in the country and then internationally by providing ease of use, accessibility on smartphone OS platform as well as availability in different languages," Kapil Dev added.

Aman Sahani, Co-Founder and CEO, SloPho.com, said, "We created a desktop version to beta test the concept first among evolved Internet users. We tested it for over a year and the results were amazing. The daily average time spent by a user was an hour and 15 minutes. We took it to a few corporates like Airtel Nigeria and Dhampur Sugar that ran promotions and were happy with the results. Today, with the launch of mobile app we believe not only will time spent by users increase significantly but it will also allow corporates and professionals to reach out and engage a much larger connected base of users."