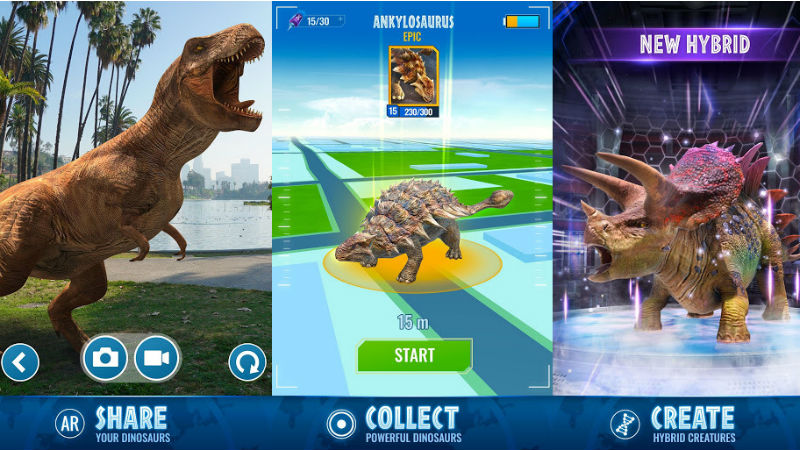 Gigantic dinosaurs will now roam the Earth once again, at least on Android and iOS devices. Similar to the once-popular Pokemon Go game, Jurassic World Alive is an augmented reality game where users find and capture dinosaurs in the real world. While you had to toss a Pokeball at the collectable creatures in Pokemon Go, you will now have to shoot dinosaurs in Jurassic World Alive. The game has been available on iOS devices since March 2018, and has been up for pre-registrations on Android for a while.

In the Jurassic World Alive game, players will encounter and collect different kinds of dinosaurs while exploring real-world neighbourhoods and cities. Creatures from the Jurassic World and Jurassic World: Fallen Kingdom have been featured in the game, and players can level them up as well as strengthen their team for real-time player-versus-player battles.

Alex Thabet, President and CEO of Ludia, has said in a statement, "With Jurassic World Alive, our goal is for audiences to be fully immersed into a world with living dinosaurs in a way that's never been possible until today. We're giving them the opportunity to explore and connect with like-minded players while building and interacting with these powerful prehistoric species."

The developers say that Jurassic World Alive leverages the latest AR technology to allow players to pose, and take pictures and videos with dinosaurs that they collect during gameplay. Also, players discover dinosaurs by locating them on a map and deploying an in-game drone to collect DNA samples.

Nevertheless, the game is currently available for free, with in-app purchases, on the App Store and Google Play. Notably, the AR capabilities should require premium and powerful smartphones like the Samsung Galaxy S9, Google Pixel 2XL, among others.