Reliance Jio's JioTV App Gets a Makeover on iPhone, iPad

The launch of Reliance Jio was accompanied by that of a number of exclusive apps, with a number of apps for entertainment. This includes the Reliance Jio TV app, named JioTV, which lets you watch over 460 channels. On Thursday, the company has released a new update for the Reliance JioTV app on iOS, which brings a fresh look, and promises new features such as a personalised program guide.

The personalised Reliance JioTV EPG shows your most-watched channel on the top of the list, though this functionality didn't seem to be working on our app. However, the redesign is quite clear, and does make the interface a lot easier to browse.

The differences are minor individually, but taken together make the Reliance Jio TV app lighter, and more easily readable. For example, the navigation has been taken out of a hamburger in the top, and brought into a row on the bottom. 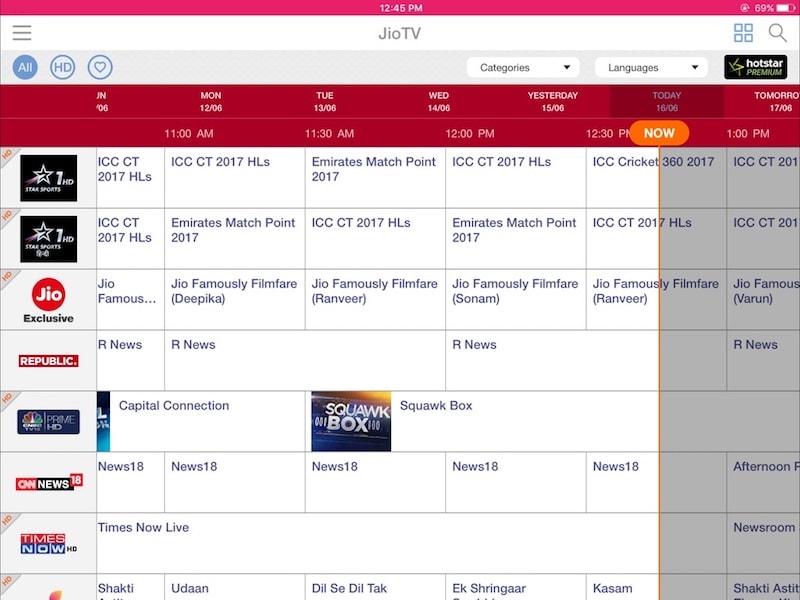 The older design has a menu button and a uniform bar

The date and time on the JioTV app, on the other hand, have been given a light background, with the current ones being red. Earlier, the whole band was red - that meant that it wasn't easy to quickly glance and see what the current time and date are.

This brings the JioTV iOS app in line with the design of the Android version of the app, and the actual functionality of the app remains the same. You can use it to watch live TV, catch up to older episodes, and set up recording of shows if you want as well. Most shows are available for catch-up and recording on the Reliance Jio TV app, though not all, and the ones that don't support this feature are shown with a light grey background in the guide.

The new JioTV interface is still pretty much like a set-top box's guide - you can swipe left or right to see upcoming shows, and shows that have been aired, and you can move up and down to see more channels. You can choose channels and categories on the Reliance Jio TV app, and you can also switch to a thumbnail view to look at channels, or simply search. 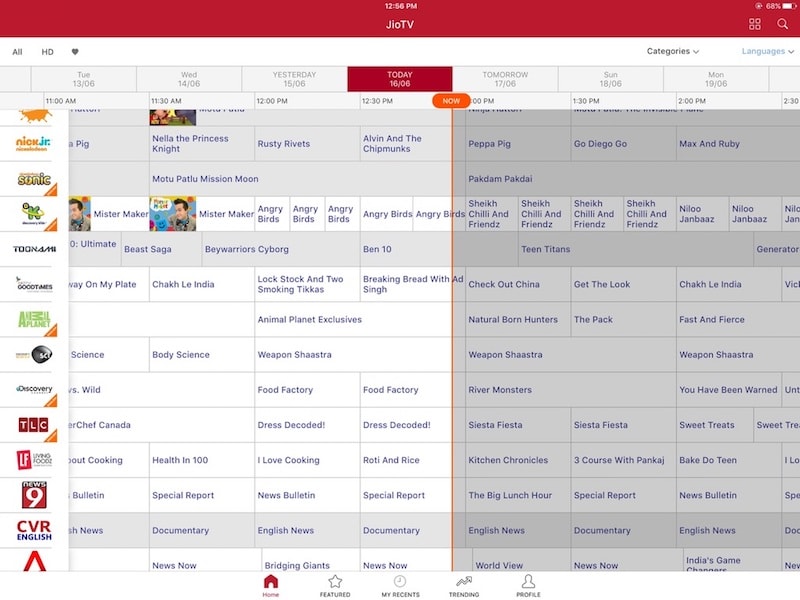 The newer look has a brighter top bar and bottom navigation

The majority of the content available is still in Hindi. If you're looking for entertainment in other Indian languages, or in English, you have fewer choices, but there is still a fair bit to choose from, when compared to other live TV streaming options.

Using the Reliance JioTV, we noticed that across half an hour, as per the data tracker on the phone, our usage was around 140MB. This works out to roughly 300MB per hour with the quality set to low. The lack of English entertainment channels on the Reliance Jio TV app could be a deal breaker for some, but if the channel list meets your needs though then JioTV could well be a good option.