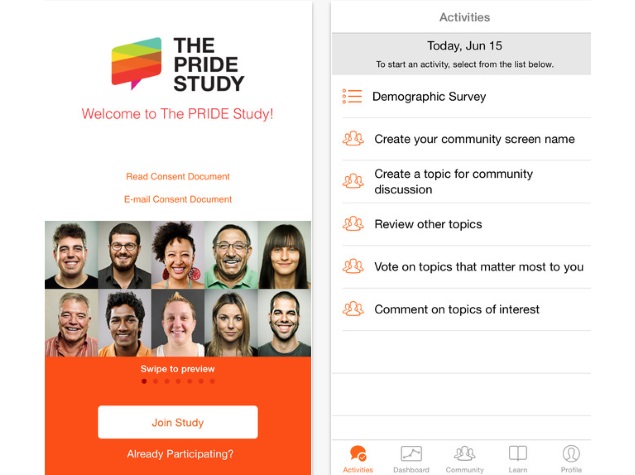 A team of researchers is launching a new study with the help of an iPhone app to look into the health and wellness issues of LGBT people.

A new ResearchKit app developed by the University of California at San Francisco will survey a wide range of LGBT folks about health issues like HIV/AIDS, smoking, cancer, obesity, mental issues and depression, macworld.com reported.

Apple CEO Tim Cook has called ResearchKit as "perhaps the most profound change and positive impact the iPhone will make on our health".

The study called "PRIDE Study", is meant to shed some light on the unique health needs of LGBT folks.

"The main question there is, what is the relationship between being LGBTQ or more broadly a sexual or gender minority person and mental and physical health," Mitchell Lunn, co-director of the PRIDE Study at UCSF, was quoted as saying.

Lunn is hoping that the study will be useful in addressing the health concerns of transgender and bisexual people, an understudied segment of the LGBT population.

LGBT health advocates are optimistic about the vast potential of tapping into the iPhone's massive user base to gather this vital information.

Finding people to sign up for a medical study and getting them to come to a clinic is very difficult. Now they can simply submit information on their iPhones from their place.

The study will also ask people to suggest which health topics pertaining to the LGBT community they want the study to address and the UCSF researchers will compile that user feedback to create the final survey questions.