Apple unveiled iOS 13 at WWDC 2019 on Monday, alongside new versions of macOS, tvOS, and watchOS. After keeping the same 150MB app download limit for cellular data for over one-and-a half years, Apple finally increased the limit last week to 200MB. Now, it seems that limit may be complete going away with iOS 13. According to online reports, Apple has changed the way the app download data limits work in iOS 13. The company will no longer stop users from downloading large apps over mobile data by overriding the default settings. Additionally, a new setting in iOS 13 will allow users to completely do away with the notifications for download limits, if they desire.

According to a report by 9to5mac, iOS 13 will warn users when they are downloading a large app or app update over mobile data, however the users will be free to override it. The current implementation of the app download limit doesn't allow users to override the limit.

iOS 13 also includes new settings in App Downloads preference in iTunes & App Store to control when app download warning appears. The options include “Always Allow,” which will allow all app downloads over mobile data, irrespective of their size.

The second option is “Ask if over 200MB,” which will show a warning if the app or app update size is over 200MB but will give the option to override the warning. The third and last option – Ask First – will mean iOS 13 will warn every time you download an app or app update over mobile data. 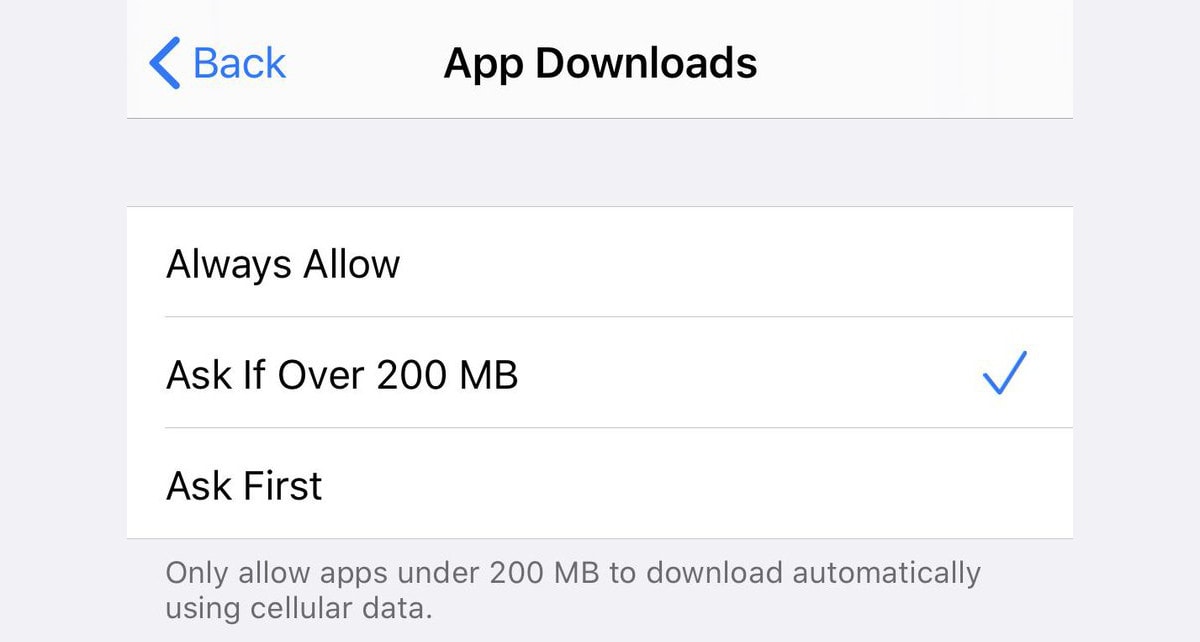 The new options are said to be visible in the iOS 13 developer preview, which was released on Monday. Public at large will get these when iOS 13 rolls out this Fall, however the public beta versions will start popping up later this month.

To recall, Apple on Monday unveiled the iOS 13 during the WWDC 2019 keynote. It brings a number of new features and enhancements including Dark mode, Sign in with Apple, enhanced photos app, and more.

Here's a list of the top new features iOS 13 brings:

Further reading: App Store, Apple App Store, WWDC, WWDC 2019
Gaurav Shukla Email Gaurav Part of Gadgets 360 news team, Gaurav handles a multitude of responsibilities from covering the latest happenings in the world of science and technology to editing and assigning news stories. In another life, he used to be a technology blogger, writing about Android and its massive ecosystem. Paranoid about online surveillance, Gaurav believes an artificial general intelligence is one day going to take over the world, or maybe not. He is a big Person of Interest fan though. More
Amazon Says 10 Million Items Now Part of Its 1-Day Prime Delivery Programme in the US
Google Online Ad Dominance US Probe Would Appease Long Suffering Rivals, Publishers