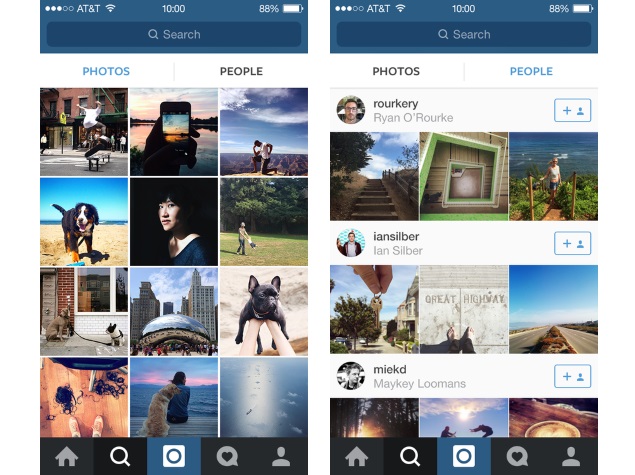 Notably, the updated Instagram apps for iOS and Android are now available on App Store and Google Play respectively.

Announcing the news, Instagram said on its official blog post, "Today, we're pleased to announce a bundle of updates and improvements designed to help you discover more on Instagram."

The new Instagram update brings a revamped 'Explore' page that appears at the bottom of the screen with a magnifying glass icon replacing the old icon. The Explore page will now show two tabs - Photos and People. The company notes, "The Photos tab has not changed. It contains the same scrolling grid of photos and videos you already know. The new People tab highlights interesting accounts for you to discover."

It's worth noting that Instagram had back in April revamped its 'Explore' page or tab on its Web interface and apps to make it more personalised, rather than showing random images of things users do not care about.

Instagram with its latest update has also introduced one of the biggest missing features in the app - a new 'Edit' option in the menu below the uploaded image. The Edit option allows users to edit captions and locations. "When you share a moment to Instagram, a typo shouldn't get in the way. This has been one of the top requests that we've heard from the community, and we're excited to finally bring it to you today," the company added.

Instagram earlier this year announced that it had crossed 200 million active users.