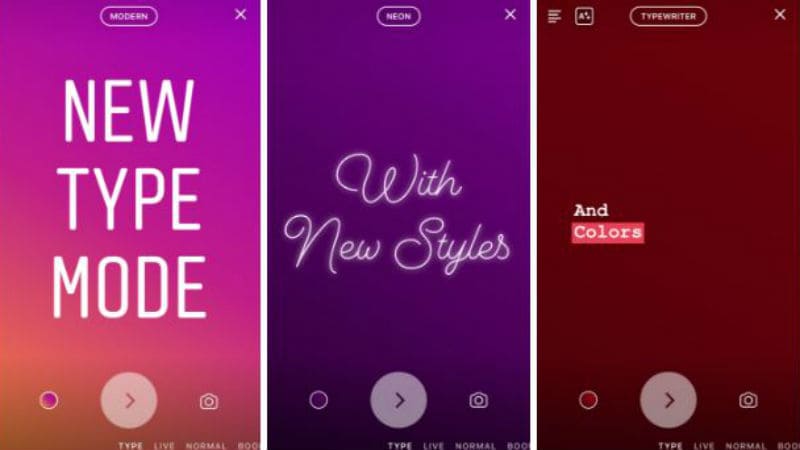 Instagram Stories has received a new feature called Type mode. As the name implies, the new feature allows Instagram users to type in a text in Stories, without having to use pictures along with it. Similar to the photo and video stories, Type stories will disappear after 24 hours as well. The new Type mode is now available on Instagram for both Android and iOS.

In a blog post, Instagram announced the new feature that enables users to share texts without the requirement of a picture or video. It said, "Today, we're introducing "Type" mode in stories, a new way to share anything that's on your mind with creative text styles and backgrounds." It added that the Type mode lets users to "turn your most random thoughts into something colorful and expressive."

Facebook-owned Instagram, in general, is a picture and video-oriented social media website. However, with the addition of the text feature, users will not have the pressure of using an image or video to express their thoughts.

The Type mode is a relatively simple feature. Users can access the new feature by going to the far left, after opening the Instagram camera. The Type mode is placed right next to the Normal mode, and other choices such as Boomerang, Rewind, and Superzoom. The user will then have the option of choosing from a plethora of various fonts, backgrounds, word highlights, and more.

Interestingly, the new fonts and colours are not meant only for the Type mode posts. As per Instagram, they can also be used for picture or video stories. Notably, in order to avail the new feature, you need to download the latest (version 30) of the Instagram app from the Apple App Store or Google Play.

This is only the latest in a series of new features Instagram has added recently. For example, one of the new features introduced on the photo-sharing platform lets users see the online status for people on Direct (direct messages). As for other upcoming features, a report had suggested that Instagram is testing out a security feature that will send notifications to users if someone takes a screenshot of their stories.