Facebook-owned Instagram is testing a new feature dubbed Nametags - said to be a clone of Snapchat's 'Snapcode' - that will let users create a "custom scannable tag" similar to a QR code by designing a pattern of emojis. Once a Nametag is created, other users can scan it via the Instagram Stories camera to quickly follow the creator.

The feature will also offer an option to use a selfie image for creating a custom Instagram Nametag, TechCrunch reported on Tuesday, adding that the selfie could be spiced up by adding AR stickers. The resultant selfie image will then be used to create a pattern, similar to the emoji pattern. Apart from emoji patterns and sticker-enhanced selfies, the Instagram Nametag feature will also work with a plain Instagram purple gradient as the background, and the username placed in the centre.

Instagram confirmed it was testing the Nametags feature to TechCrunch, which received screenshots from reader Genady Okrain who is also founder of Momento GIFs. The Nametags feature was first spotted in mentions in the Android APK code last month, but it is only now being seen on the app's front-end. 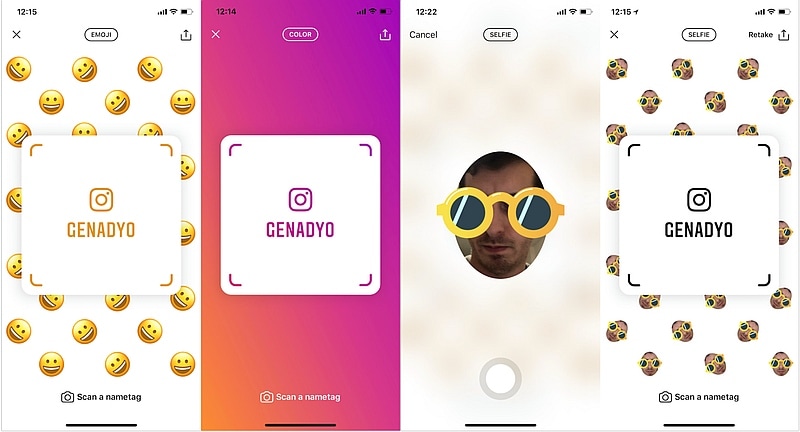 "Nametags could make it easier for people to visually promote their Instagram account. It could make it simple to follow a friend you just met by having them open their Nametag and then you scanning it. Meanwhile, businesses and social media stars could post their Nametag across other social media handles, print it onto posters or handbills or even make merchandise out of it," the report reads.

Snapchat launched Snapcode in January 2015 that allowed users to add friends using their phone cameras. Instagram has been in the news for copying Snapchat features for a while now.

"Instagram is simply building upon a technology that Snapchat created," Kevin Systrom, Co-Founder, Instagram had said in a recent interview with Wall Street Journal. Back in 2016, Systrom had admitted to the New York Times that "other companies deserve all the credit" for popularising ephemeral images and videos, referring to how Instagram Stories was picked up from Snapchat.