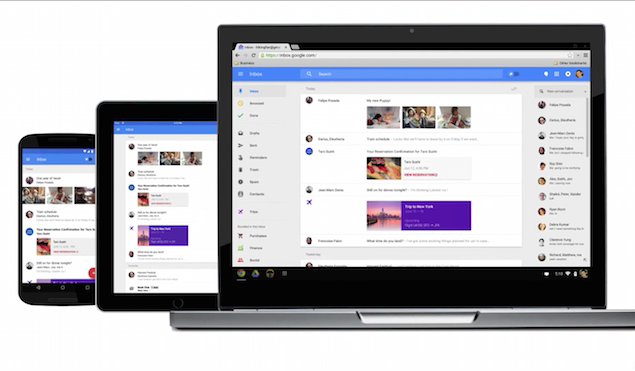 On day one of Google I/O 2015 on Thursday, the tech major announced that its standalone email client based on Gmail - Inbox by Gmail - is now open to all for download. This means that users don't have to wait for an invite anymore, which was pretty easy to come by anyway.

Google has also added a good amount of updates to Inbox by Gmail, quite expectedly. A new Trip Bundles feature clubs all the emails about a trip into a single bundle. For example, if you have planned for a trip to say Goa and have multiple bookings in the form of flight, hotel and cab - all the emails detailing this information will be put together in one easy to access bundle. The icing on the cake, however, is that Inbox by Gmail will pull up the most important information first based on the time of booking. So, flight booking will be succeeded by hotel in this case.

The new smart reminders feature for Inbox by Gmail will prompt you to set a reminder automatically when someone commissions you to do a task in an email. Reminders will now also sync between Google Keep, the company's note-taking app, and Inbox by Gmail.

Additionally, with this update for Inbox by Gmail, Google allows developers to embed deep links to apps into emails. This essentially means that links will open the app directly instead of a web page. This also negates the need to log in again. Google states that the launch partners for this feature includes Hotels Tonight and Eat24 apps.

The Inbox by Gmail update also includes the ability to undo sending an email within the first 10 seconds of hitting the send button. Google also adds custom email signatures for Inbox, and also gives users the power to change Inbox's swipe gesture from marking emails as done to deleting them by default in settings. Both signatures and delete features were recently promised to be delivered in an upcoming update by the firm.

Talking to TechCrunch about the focus on the Gmail app, Shalini Agarwal, Senior Product Manager for Inbox, Google, said, "We think about Gmail and Inbox differently. Gmail is our best-in-class email product and we want to keep it that way"

Google has also opened up Inbox for Google for Work, its enterprise software solution, users. They will be enrolled in an early adopter program provided the IT admin allows access.The updated Inbox by Gmail app is available to download for Android and iOS via Google Play and the App Store.