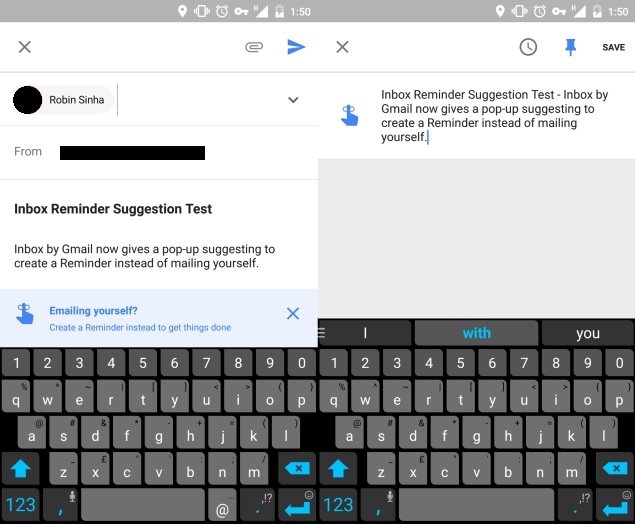 Google, since the launch of Inbox by Gmail in December last year, has been constantly updating the app and service. The search giant has now added another nifty little feature in the application, making it slightly more useful.

The Inbox by Gmail app now gives users a small pop-up on the screen suggesting that they should create an Inbox Reminder instead, when it recognises users mailing some content to themselves. The pop-up is shown as soon as the users choose their own name in the mail recipient section. It is worth mentioning that once the user taps on the pop-up to create a Reminder, the text typed inside the composed mail is automatically copied on the new Inbox Reminder, to which users can later add the location and time.

The feature does not prompt users to upload any attachment on the self-addressed mail to Google Drive. The new feature was first spotted by a user (via Android Police).

Back in February, Inbox by Gmail was extended to the Apple iPad. The company has also provided Web version support for Firefox and Safari.

As per statistics shared by Google earlier this year, Inbox by Gmail is used by 70 percent Android users, 28 percent iPhone users and 34 percent Web users across the globe. The company says 85 percent of the total email messages are bundled by users, most commonly into Promos (33 percent), Updates (20 percent), Forums (14 percent), Social (13 percent), and others (5 percent).