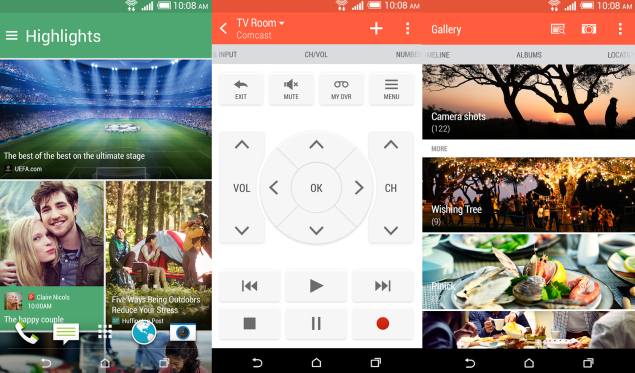 Ahead of the HTC One (M8) launch event on 25 March, HTC silently released the HTC BlinkFeed, HTC SenseTV and HTC Service Pack apps on the Google Play store on Monday. By Tuesday, the company also released two other apps to the Play Store - HTC Gallery and HTC Guide.

All the apps are available as free download from the Play Store. HTC hasn't specified about the compatibility of the released apps on the Play Store listing, and according to reports they are not even compatible with the HTC One. The Service Pack app however, seems to be compatible with a few devices. It is being speculated that these apps will bring ability to update to the new Sense UI via individual native app updates.

We hope that HTC will detail the rest during the announcement on 25 March event at at 8:30PM (IST) and the launch event.

There is not much to learn from the listing page, except that the BlinkFeed page does confirm that it will sport an Offline Reading mode that caches content over Wi-Fi.

HTC Service Pack
There is not much to be seen on the HTC Service Pack Play Store listing page, and shows the new BlinkFeed UI. HTC says the "support service update that combines previously released updates and helps make your HTC experience more reliable.

HTC SenseTV
The third app uploaded by HTC, HTC SenseTV, finally brings support for the IR blaster on the HTC One Google Play Edition, which helps control TV, set top box and home theatre setup. The HTC SenseTV app will display the TV schedule with additional info for each show, including scores and statistics for sports games.

HTC Guide
The Play Store listing page says the app provides virtual customer support, which means that instead of having to call a service department if something is not right, the app does the troubleshooting for minor issues. Also the app provides users with the number of HTC's nearest service provider and notify about regular software updates.

HTC Gallery
The app is listed with a feature Image Match, which lets users choose a photo with the object or person they want to find, and locate similar images for them. The app also gives users a Timeline View that allows them to locate images by day, month or year. Additionally the POI Location search feature helps identify places of the photos, where it has been taken.