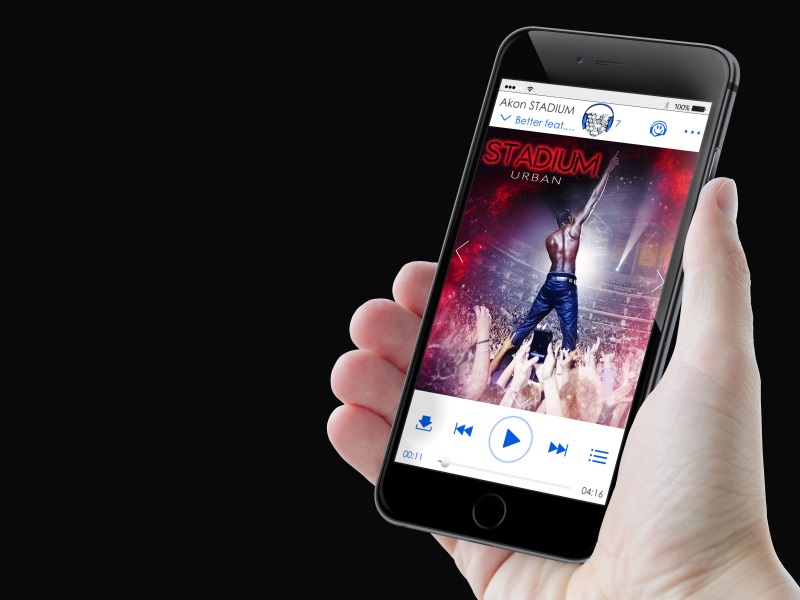 Akon, a hip-hop star who's collaborated with everyone from Eminem to Andy Samberg, is about to release his first albums in seven years - but you won't find them in stores or on streaming services like Spotify. Instead, he plans to release four albums through a new app, making him the latest artist to experiment with bypassing big record labels and traditional music distribution altogether.

The new app, called Stadium, will let fans stream Akon songs for free, although they'll have to put up with ads. But interacting with the app by clicking the ads or sharing with friends on Facebook will earn users credits they can use to "buy" digital goods such as ringtones, wallpapers and Akon-styled emoji. And, of course, to unlock more songs and unreleased videos.

"It's going to definitely regenerate the music business," Akon said in an exclusive interview with The Associated Press, calling his app "the answer" to the music industry's problems. "It's going to take someone like me to take the chance on it."

It's not a bad deal for Akon junkies; it lets them stream otherwise unavailable new music legally from their smartphones. For artists like Akon, this kind of independent digital route offers other major advantages - among them, sidestepping Spotify, Pandora and their ilk. Many musicians resent those services for offering what artists consider a tiny cut of streaming revenue.

That's a big issue in the music industry, where sales of downloaded music are falling while streaming is surging. Services like Pandora and Spotify argue that they give out the majority of their revenue to artists and labels and the amount will only grow as more people stream.

Artists' own apps, however, can garner them a greater slice of ad revenue, while also scooping up data on which songs fans like most and where they live. Musicians can use them to sell concert tickets, backstage passes and T-shirts and other merchandise.

By appifying himself and going independent, Akon aims to super-serve his 60 million-plus fans on social media. He said that roughly 200,000 people have already registered to receive the Stadium app when it's released in the next couple of weeks.

Other artists have gone down a similar road. Radiohead released "In Rainbows" as a pay-what-you-want album download in 2007. Lady Gaga debuted songs from "Born This Way" on a special version of the video game "FarmVille" in 2011, and last year U2 released "Songs of Innocence" as a free album to iTunes users, sponsored by Apple. Some acts - like Macklemore, Nine Inch Nails and The White Stripes - have foregone traditional record-label deals and thrived.

But none of these efforts have yet yielded a broadly viable way of getting music into the hands of fans while paying artists what they think they deserve.

Streaming music, meanwhile, is exploding. It's on pace to double this year, according to Nielsen Music data, gains that would propel U.S. "album" sales upward for the first time in four years. (Nielsen counts 1,500 song streams as equivalent to an album sale.) Streaming is "a huge piece of the business," said David Bakula, senior vice president of analytics at Nielsen.

Akon's first four albums for the Stadium app will each hew to a different genre: world, house, urban and reggae. The last album, in the pop genre, will be released sometime before March next year, likely in standard formats on multiple digital and physical channels through Warner Music Group's Atlantic Records, Akon said.

Warner said it was too early to comment on its plans.

Vickie Nauman, a Los Angeles-based digital music consultant, says more artists should experiment with offerings like Stadium. Major streaming platforms, she says, are often incredibly cluttered, given that they can offer 30 million or more tracks. She argues that streaming is also too expensive, since the $10-per-month on-demand plans like Spotify and Apple Music are roughly double what consumers have traditionally paid for music.

"Until we meet consumers where they are, at a price point they're willing to pay, and a user experience that has value, we won't have mass adoption of streaming," Nauman said.

The Stadium app was developed by EscapeX, a New York startup that launched in July. It has made white-label apps for artists such as Karmin and plans to also release new music in new apps for the estate of Bob Marley and DJ Armin Van Buuren. Artists that own their music, as in Akon's case, keep 70 percent of the revenue. Otherwise they have to divvy that share with other rights holders.

EscapeX CEO Sephi Shapira says artists need to tap into the economy of engagement instead of hoping more people will pay for music. "Ninety-five percent of people will never pay for a subscription service," Shapira said. "We're telling artists to come join this economy."

Akon said his cut of streaming revenue will be far better than on popular platforms like Spotify or Pandora. "You've got a fraction of a penny with them, and you've got cents over here," he said, noting that songs like "Sexy Chick" and "Lonely" have collectively been streamed more than a billion times since release.

"Just think about it," he said. "Why give someone like Spotify or Pandora 99.9 percent of what should go in your pocket? It doesn't make sense."