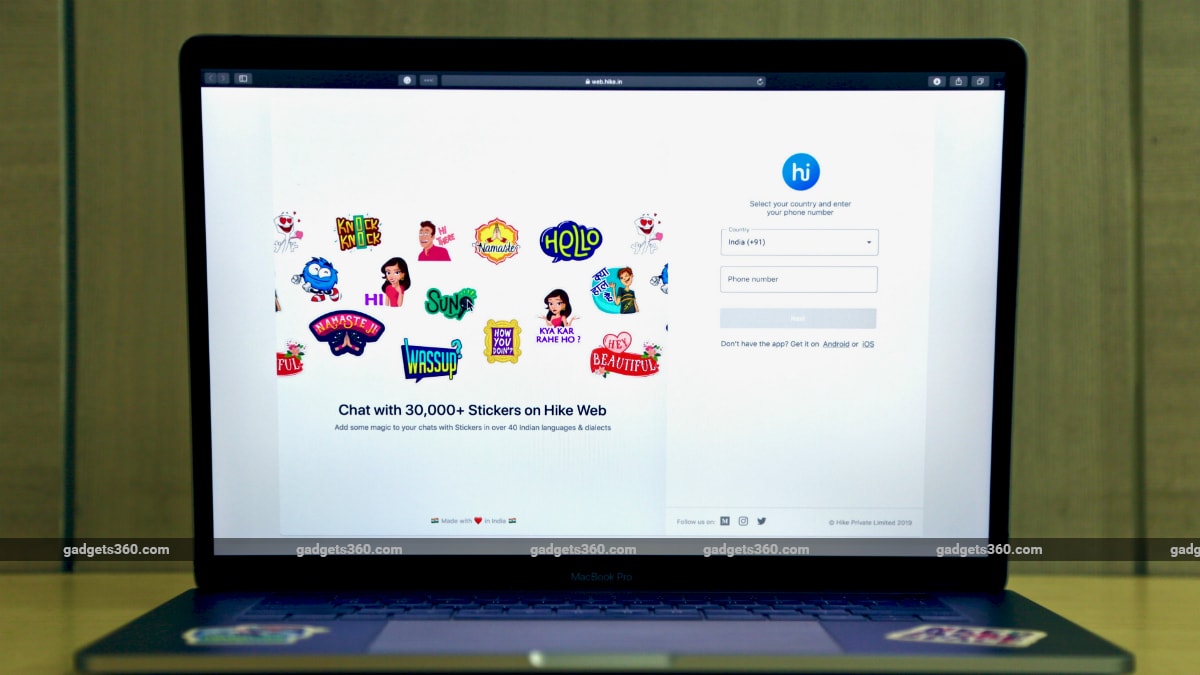 Hike Sticker Chat, the dedicated app that was launched back in April to deliver a sticker-centric chat experience, has been updated with an Auto Backup feature. The new feature is designed to let users easily switch from one device to another -- without manually backing up or restoring their data. The New Delhi-based firm that was once competing strongly against the likes of WhatsApp and WeChat has also brought Hike Web that is designed to enable instant messaging on a Web browser.

With the Auto Backup feature, users of the Hike Sticker Chat app can seamlessly back up and restore their data from one device to another. The latest development is touted to be the only current alternative to the existing Backup and Restore process that's available on many popular instant messaging apps, including WhatsApp.

"Why in 2019 do we still have this notion of backup and restore?" says Kavin Bharti Mittal, founder and CEO, Hike, in a conversation with Gadgets 360. "It makes no sense. We've just made this completely seamless."

The Auto Backup feature initiates data transfer just after you provide your existing phone number and then enter the four-digit PIN you've received on your new device. The Hike app also automatically logs out from the original device once your data becomes available on the new hardware.

The data transfer process doesn't take more than a couple of minutes to restore all the data, including conversations as well as media content. Also, users don't need to manually back up their data every single time. Mittal tells Gadgets 360 that the backup process works automatically in the background and doesn't consume any additional data.

"There's no need to backup and restore data, upload the data on the cloud and come back, and spend an hour waiting for your chats to restore," the executive says.

He also highlights that the Hike team has optimised the entire architecture to make sure that the new feature will not only provide a seamless experience for data restore but will also work across multiple platforms. This means that you can transfer your data from an Android device to an iPhone or vice-versa.

The architecture-level changes that brought the Auto Backup feature have also enabled Hike to bring the Hike Web client. "Our goal is to make Hike Web as seamless as possible so that let's say if you don't have your phone with you, you can just go to the cafe laptop, log in, and start chatting with your friends," states Mittal.

Unlike WhatsApp Web that requires users to sign in by scanning a QR code, Hike Web asks users to enter their phone number and then type the four-digit PIN that they've received on their phone to get started with the new experience.

The Web client, which is initially available in beta, provides a seamless chatting experience on Web browsers. It initially doesn't offer all the features that are available on the Hike Sticker Chat mobile app. However, Hike is set to roll out bi-weekly updates to bring new features on a regular basis.

"One thing what we've done is that we've worked extremely hard in reliability and performance -- that's been the key," notes Mittal. "So instead of adding a lot of fancy features, we've just said let's go [and] focus on the performance because at least we would be able to get the client out."

Hike Web presently continues with the signed-in account even if you've closed the tab on your Web browser. Mittal, however, points out that the team has implemented a system that logs out users after detecting certain kinds of activities. A TTL (Time to Live) mechanism is also available at the backend that enables the Web client to reset the cache and token after a certain period of time. Similarly, an option to force logout is available on the Hike Sticker Chat app.

"We don't want people to get pester all the time," asserts Mittal. "So if you're phone is active, you'll receive notifications on your phone's screen, but if you're not active, notifications will come on the Web."

The Web client is specifically optimised for Google Chrome. However, Mittal says that it also works smoothly on other browsers, including Firefox and Safari.

Alongside the Auto Backup feature and Hike Web, Hike engineers have bumped up the security of the app by adding 128-bit AES and 2048-bit RSA encryption. Mittal tells Gadgets 360 that the new update isn't just securing the data available in Hike's servers but it also implements encryption on the channel through which the user data is being transmitted.

Hike has also added SSL pinning and deployed a randomised key management system to enhance the security of the Hike Sticker Chat app.

"We also make sure that machine learning can work with the fact that data is encrypted," Mittal continues.

Already serves over a million weekly active users
Hike Sticker Chat was launched as a spin-off of the original Hike app earlier this year. Mittal reveals that the new app has over a million weekly active users, on an average spending 33 minutes inside the app. There are also over 50,000 stickers that are aimed to be expanded to 100,000 by the end of the year, he added.

"People are liking this simplified app and loving the fact that there's no bells and whistles in that," the founder tells Gadgets 360. "It's a very simple app focussed on two things -- expressions through stickers and close friends."

Just ahead of launching Hike Sticker Chat earlier this year, Hike decided to completely stop working on the original app, which it calls the "super app." The company also transitioned all its existing resources of over 135 people to start working on the sticker-focussed app. The team, which consists of designers, product managers, artists, and content developers, is expected to grow further to 185-190 people by the end of the year.

"One of the things about Hike is we're a company that works at the intersection of product, design, engineering, and art," says Mittal. "We create all this content by ourselves. It's not an easy process."

Aside from stickers, Hike is currently considering gaming as its next area of focus. The company led by Mittal acquired a minority stake in e-sports vernacular gaming platform WinZO just last month. The deal has helped the company offer a standalone gaming app to mobile users.

"Our focus is how do we unbundle Sticker Chat, gaming, and content into three different applications. So far we've done two (Sticker Chat and gaming), and we've planned to stick to the two in 2019," Mittal concludes.