Hike wants to create a virtual economy around HikeMoji to monetise the app in 2020.

Hike Sticker Chat app that debuted to offer sticker recommendations in place of text messages has surpassed the mark of two million weekly active users. The app was launched in April this year as a spin-off of the original Hike app that was meant to compete against the likes of WhatsApp and WeChat. Last month, Hike also introduced artificial intelligence (AI) powered HikeMoji that exists within the Hike Sticker Chat app to let users personalise their avatar with local components and languages. In a conversation with Gadgets 360, Hike CEO Kavin Bharti Mittal revealed that in less than a month since its launch, over 200,000 HikeMoji avatars have been created.

“Not only we're seeing a pretty sizeable usage of the stickers inside the app, but people are actually sharing the stickers outside the app,” Mittal, 32, told Gadgets 360, while detailing Hike's growth in 2019 at its headquarters in New Delhi.

Mittal and his team this year moved focus from maintaining an instant messaging platform and instead introduced the Hike Sticker Chat as the next-generation solution, completely leaving behind Hike Messenger - once a popular competitor against WhatsApp.

“It's a first step towards something much, much bigger,” he asserts. “Because one of the things that we're very clear about is communication has been solved for. It's been done. If there is a typical keyboard messaging -- all that stuff is done. The question is what's the next big step? And how do you allow people to express in new ways, in different ways with all the technology that we have in 2019.”

In a little over three months after the official launch, the Hike Sticker Chat app reached the mark of a million weekly users. The New Delhi-based firm also brought features such as Auto Backup and a Web client to ease the experience. Similarly, the sticker base that had over 50,000 stickers initially widened to more than a million stickers. All this helps attract new users. Mittal aims to ultimately offer a keyboard-less experience for personal communication. However, he underlines that instead of bringing something big for the users, Hike wants to go step-by-step towards the keyboard-less direction.

“We didn't launch an experience where it's keyboard-less in day one,” the entrepreneur states. “The idea is can you take the world beyond the keyboard step-by-step.”

Aside from recommending stickers for conversations, the Hike Sticker Chat app added HikeMoji that lets people design their avatars with over 1,000 hairstyles, facial features, local clothing, and nose pins. Users get over 100 stickers of their HikeMoji avatar that they can share across social media platforms. Further, there are options to pick HikeMoji stickers in any of the seven regional languages in addition to English and Hindi.

“In 2020, we're going to continue on that part of building experiences like HikeMoji and using machine learning to sort of go beyond the keyboard,” Mittal tells Gadgets 360.

Hike is already using AI to empower its core features such as HikeMoji and sticker recommendation on the Hike Sticker Chat app. But to grow bigger and offer a distinct experience to users, the company, which recently hosted an AI First conference in Bengaluru, is set to bolster its journey with AI.

Projects to get monetised through HikeMoji

One of the major pain points in the app market so far is the lack of monetisation. A lot of startups bring new apps, but they don't have a concrete model to generate revenue and at the end face hardships to sustain their business. Nevertheless, Hike is bullish on monetised by leveraging HikeMoji.

“The HikeMoji will become the centre of everything we do,” says Mittal. “We will build a virtual economy around the HikeMoji and HikeMoji stickers in 2020.”

With the addition of HikeMoji, Mittal points out that Hike is already receiving demand for accessories such as tops or hats that can be used on the avatars created by the Hike Sticker Chat users. Some users are also keen to share their avatars on other apps. All this is what the company wants to use to generate some revenues next year.

“Our goal is to partner with other platforms in our way to drive more distribution,” he tells Gadgets 360. “So don't be surprised if you'd see the HikeMoji stickers in many more places in 2020.” 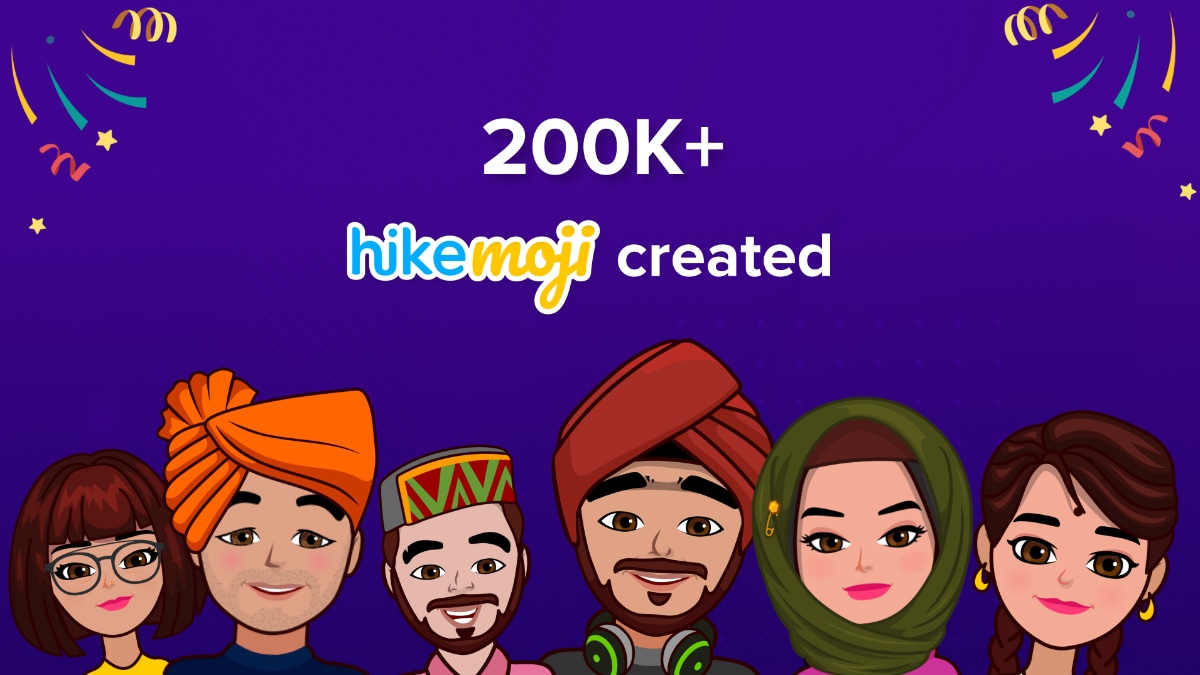 HikeMoji sticker count has surpassed the mark of 200,000 avatars in less than a month

As per the insights shared by Mittal, users less than 21-year-old capture most of the Hike Sticker Chat's user base. The app is also largely popular in cities like Ahmedabad, Pune, and Hyderabad.

“Our goal is to extend into the tier two cities because a lot of our vernacular, local content will be even more powerful in those cities,” he mentions.

In addition to the expansion plans, Hike is aiming to enhance the existing experience on the Hike Sticker Chat app and get deeper into the lives of its users by letting them create stickers for their conversations. This would be similar to how users can currently design their HikeMoji avatars.

“The 2020 plan is to put the HikeMoji at the centre,” says Mittal. “It's not just the stickers. The way we've delivered HikeMoji, the first form is stickers. But the HikeMoji itself is the key 2020 [plan]. How can we build more around the HikeMoji? It's the big question. That's gonna be our big focus in 2020.”

The growth to two million weekly active users for Hike is indeed far less if we compare it with over 400 million Indian users exist on WhatsApp. But nonetheless, Hike doesn't want to be an instant messaging app for the masses. It instead wants to emerge as a unique solution for communication between close friends.

“The goal of Hike Sticker Chat is to allow people to deepen their relationships with their friends… And with HikeMoji and the expression [they enable] is a great way to deepen your friendship around a shared experience. So we're going to focus on HikeMoji and what we can do with HikeMoji in 2020. That will lead to an improved experience a bunch of other stuff,” Mittal concludes.