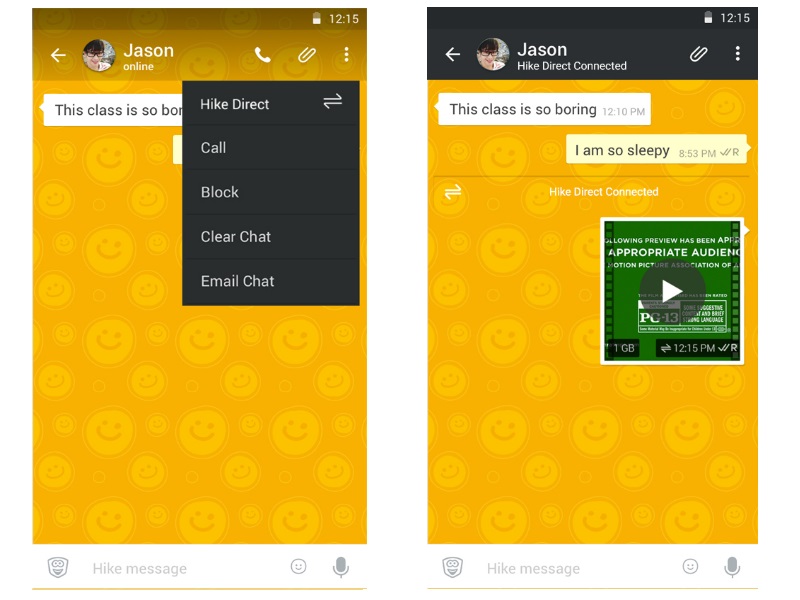 Instant messaging platform Hike on Thursday launched a new feature named Hike Direct which will allow the app to function without an Internet connection and also said that it has reached a user base of over 70 million.

"At a point of time in the country where several people are yet to come online, Hike Direct will connect users in a never before seen revolutionary way. The feature can work without Wi-Fi or mobile data and allow users to send photos, stickers, files and messages to anyone who is also on the Hike network," said Kavin Bharti Mittal, founder and chief executive of Hike.

"Files as large as 70MB can be sent in over 10 seconds," Mittal added.

Although the feature can work without Internet, it won't work outside a 100-metre radius. The technology used to create the feature is same as the Wi-Fi direct technology available in most smartphones today.

Mittal said the messaging application was growing at a pace of 100 percent year-on-year. "Currently we are processing 20 billion messages monthly and people are spending at least 140 minutes on the app on a weekly basis."

Recently, the messaging platform released a feature that would allow users free group calling on the app, connecting up to 100 people at the same time.

The Bharti SoftBank-backed messaging app has released a flurry of new features which include free stickers in local languages, data transfer option up to 100MB, and making the platform 4G ready, to expand its consumer base in the country which is over 35 million.

Bharti Softbank is a joint venture between Bharti Group and Japan's SoftBank. Other popular rivals like WhatsApp and Viber, respectively, have a user base of 900 million and over 40 million.

The messaging platform had also secured $65 million (roughly Rs. 400 crores) in funding in the middle of last year from a group of overseas investors led by Tiger Global Management.