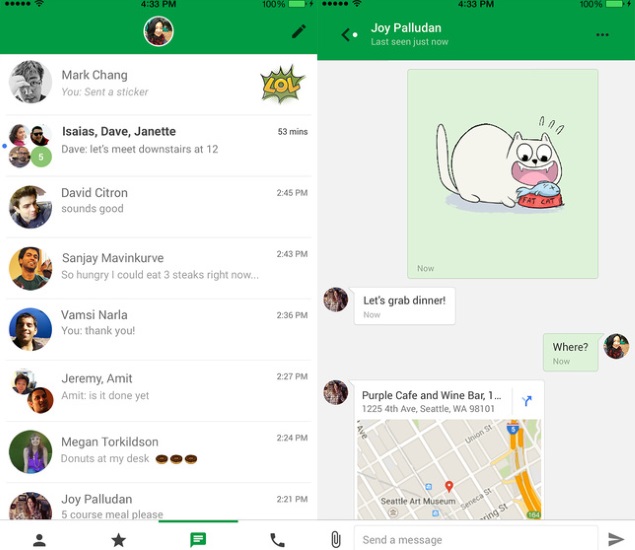 Following the Hangouts for Android update last month, Google on Monday updated the app for iOS devices as well. The company had promised an update for iOS back then.

The Hangouts for iOS version 2.5.0 can be downloaded via the App Store, and is compatible with iOS 7.0 or higher devices.

Google's Hangouts app for iOS includes new sticker packs, and the ability to search for contacts by phone numbers. It now also shows the last seen timestamp and supports status messages, apart from 'one-click' location sharing, and access to SMS and voicemail from the user's Google Voice account. Google is also boasting of an improved video call experience, and miscellaneous bug fixes.

Previously, Google Hangouts for Android had included 16 new sticker packs ranging from "penguins to pirates, koalas to cats". For video, Google had introduced new video filters that include modes like sepia, vignette, black & white, and more. Users can use these modes with a simple swipe during a video call.

A feature that is now common in both Android and iOS apps is the phone numbers in Hangouts, which makes the discovery easier in search via phone digits. Additionally, both apps also have the new WhatsApp-like 'last seen' timestamp.

Last month, Google had also brought back the ability to set statuses on Hangouts in Gmail. Notably, the tool was already available in Google Talk, however it got sidelined ever since the introduction of Hangouts. The firm had also updated the app for Android devices that support voice-calling feature.
Comments