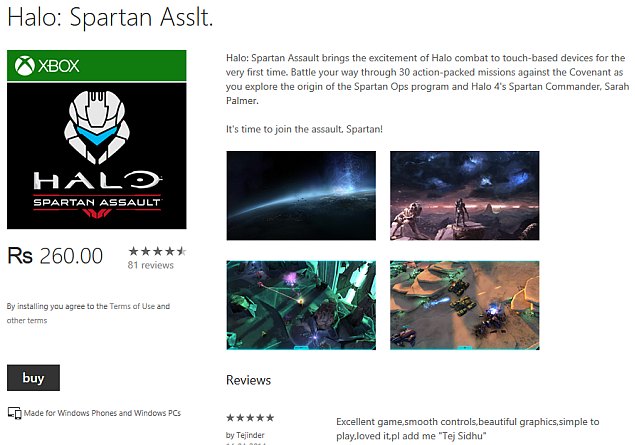 Lately we have been hearing a number of announcements regarding Microsoft's implementation of Universal Windows apps, with the company starting to accept these submissions, as well as detailing the various changes to the respective stores and 'Dev Centres'. On Tuesday however, the Microsoft Studios' Halo: Spartan Assault become the first Universal Windows app.

As with all Universal Windows apps, users will be able to purchase Halo: Spartan Assault on any one Windows platform, and be able to play it on any other linked Windows devices without shelling out any extra cash. In-app purchases, achievements and saves will also be synched across devices.

The Universal Windows game arrives a day after since Microsoft started accepting Universal Windows apps via its Windows Phone Dev Center and Windows Dev Center websites. Earlier this week, the firm also unveiled the consolidated and simplified price tiers for developers on the corresponding app stores.

Halo: Spartan Assault's price has been set at $4.99 (Rs. 260 in India) across the Windows OS ecosystem. The app is available through both Windows Store and Windows Phone Store.

The Universal Windows apps, that was introduced in the firm's 2014 Build Conference, aim to bring a new common Windows runtime to PCs, phones, and tablets (and the Xbox One). Consumers will be able to buy an app on one platform, and be able to use its migrated counterparts on other platforms, even retaining in-app purchases if any. More details on the Universal Windows apps can be found from our Build Conference coverage.