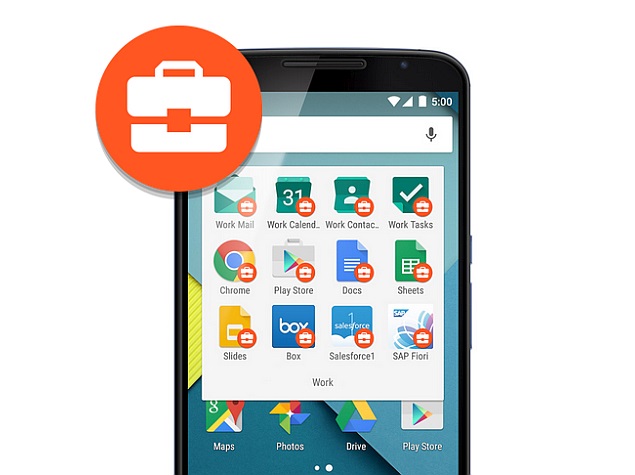 Google's much-anticipated Android for Work initiative has gone live and the app is now available to download via Google Play. Additionally, Google Drive alongside Google Docs, Sheets, and Slides apps have been updated adding new features.

Google's Android for Work platform was initially unveiled in February for Lollipop. The Android for Work app that has now hit Google Play is meant for devices running Android 4.0 Ice Cream Sandwich and above. At the time of writing, it had just 10 to 50 installs tipping that the company needs to promote the program to make it more appealing to corporations.

To recall, Google's Android for Work separates business apps from personal apps so that users can use their preferred Android device for both work and play.

In other news, Google Drive for Android has been updated to add the option to connect with more people, as well as to make it faster to share recently uploaded files. The company announced the update via a Google+ post and added that it also brings a host of performance improvements. The Google Drive for Android has also received support for 23 new languages including Armenian, Basque, Chinese (Hong Kong), French (Canada), Georgian, Khmer, and Malayalam among others.

Google Drive's post said, "You'll be able to share a recently uploaded file directly from the notification you receive once a new file upload finishes. This lets you get that recently snapped photo or PDF download to the people you want to share it with even faster." The company notes that the update will roll out to users over the next week.

Google has also updated its Docs, Sheets, and Slides apps adding new features for fine tuning work on the move. Google Docs now will offer the option to view and act on suggestions from Android devices and iPhone as well as iPad devices. Like Android, the Docs apps for iPhone and iPad have also been given the ability to edit tables.

"When you give others 'can comment' access in Docs, any formatting or copy changes they make become suggestions that you can accept, reject, or comment on. Today's update makes it possible for you to view and act on suggestions from your Android devices and iPhones/iPads, and brings tracked changes and comments to Word files, too."

With the latest update, Google Sheets users can move, resize, and delete charts in Sheets as well as reorder objects to the front or back in Slides on Android. Lastly, Google Slides app will now load and scroll more swiftly compared to earlier version.