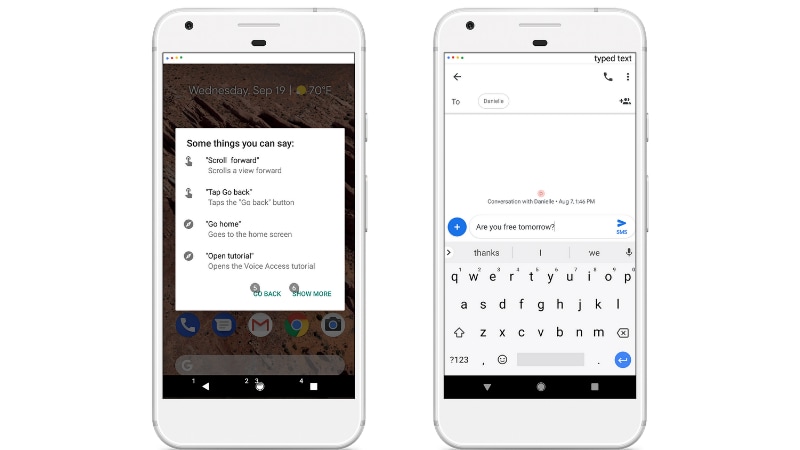 Google on Tuesday announced the launch of its latest app that helps give users who cannot access a touchscreen due to certain chronic or temporary reasons hands-free access to their smartphone using only voice commands. The app is called Voice Access and is available only on Android. Using the Voice Access app, users will be able to perform actions like navigate through apps, compose and edit text, talk to the Google Assistant, and recreate gestures using certain voice commands. To recall, Google Voice Access has been in beta since April 2016, and is aimed at people with limited mobility.

“After using this product for probably about 10 seconds, I think I’m falling in love with it,” said Stefanie, one of the members of Google Accessibility team that worked with early prototypes of the app. “You use your voice and you’re able to access the world. It has become a huge staple in my life.” Google’s Voice Access is available globally in English language, and Google says additional language support is coming in the future.

The app is now available on Google Play and has a file size of just about 4.6MB. Once installed, the feature can be turned on by going into Settings > Accessibility and turning on the Voice Access switch. A setup and tutorial will be shown on first usage to help the user become familiar with the voice controls. To take full advantage of Voice Access, the Ok Google command needs to be activated for all locations in the smartphone.

Google claims that it focused on users with issues such as Parkinson's disease, multiple sclerosis, arthritis, spinal cord injury, and others to develop the accessibility app. Additionally, the tech giant says that Voice Access can also help users who are busy in things like cooking or juggling groceries with easier hands-free controls.

“When using Voice Access, you can compose and edit a text message hands free by saying 'Ok Google,' and open your favourite app with the 'open' command. Then, select the text field by speaking the number Voice Access displays next to it. After saying your message out loud, like 'would you like to meet for lunch tomorrow?' you can edit the text using phrases like 'replace tomorrow with Saturday' to change the day you want to meet,” said Patrick Clary, Product Manager, Central
Accessibility Team, Google. The company’s support page lists all available voice commands for Voice Access.