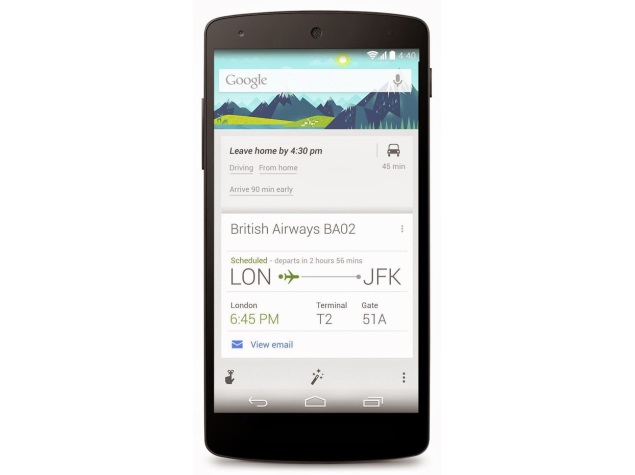 Google has rolled out a new update for its Search app for Android that adds a bunch of new features to the app.

The Google Search now features an improved and customizable time-to-leave system, which can be used to remind a user who should be somewhere by a certain time and will inform the user when should plan to leave instead. Mountain View's Google+ page said, "You can specify where you'll be leaving from, if you're driving or taking public transport and how early you'd like to arrive - just tap the card and you'll see those options - and Google Now will do the rest."

Further, Google has added a new Google Now card for the current Sochi Olympics, which will be updating the medal standings, news and forthcoming events. Last week, Google placed a rainbow version of its logo on its search page, intending to increase the pressure on President Vladimir Putin over Russia's "gay propaganda" law at the Sochi Winter Olympics. The Google Search homepage also included a quote from the Olympics Charter underlining the right to practise sport without discrimination.

Google has also rolled out an update for the Google Play Newsstand app that brings new features, such as headlines on the home screen with the Newsstand widget, and a new 'mini cards' feature that allows users to quickly access the headlines of the latest news. The new update also adds an option to organize magazine issues by publication date and translate news sources instantly.

In addition, the yet-to-be-launched Google Now Launcher that was first spotted last week, and was speculated to be soon released to other (non-Nexus) Android devices as an app on the Play Store, is now available via APK (Android application package file).

Phone Arena has claimed that Nexus 5's GoogleHome APK can be installed to any Android device after updating Google Search to the latest version. The site also reveals that the Nexus 5's Google Now Launcher is working smoothly on the Samsung Galaxy S4 and HTC One, though some users are reporting problems with other devices.