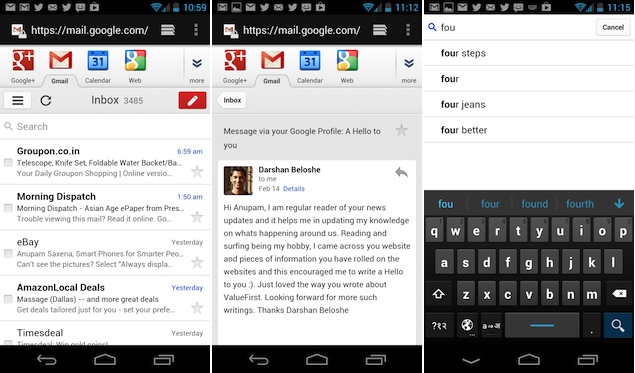 Google has updated the Gmail Offline app for Chrome as well as mobile web apps for Android, iOS,BlackBerry and Kindle Fire devices, bringing a refreshed user interface. It's interesting to note that Google has left Windows Phone out of the list, with the two companies being at loggerheads at several occasions in the recent past.

While Google has not provided a detailed change-log, it does mention that the update includes the changes that were first pushed to the Gmail native app for iPhone and iPad in December 2012, and would include a refreshed user interface in addition to new features such as improved search and integration with Google Calendar.

The update had brought profile pictures in messages, some new animations such as swivels and transitions in addition to infinite scrolling in the message lists. The update had also introduces the ability to sign-in to multiple accounts, RSVP to Google Calendar invites as well as +1 and comment on Google+ posts directly from the app.

We tried using the app and found that it now features profile pictures, infinite scrolling, auto-complete while searching for a mail, and the ability to sign into multiple accounts. The earlier update had brought some features from the Sparrow app, which was acquired by Google, last year. Following the acquisition, a Google spokesperson had said that the company would bring new intuitive interface features to Gmail with help from the Sparrow team which joined the company.

The Gmail Offline app for Chrome was still showing 16 November 2012 as the last updated date, at the time of writing this post.
Comments

IBM pays CEO $15.4 million in her first year on the job
SimCity climbing from launch wreckage