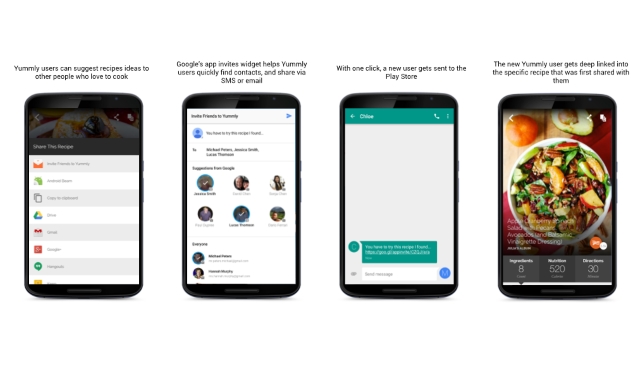 Google has introduced a new system called App Invites, which is designed to make the process of referring apps to friends and family easier for users. Mobile app developers can grow their application's user base by integrating the App Invites system into their apps. The service is currently in beta for both Android and iOS.

App Invites features a set of tools that lets developers create a system where users can invite their friends to try an app using SMS or email. Developers will also be able to measure the success of the system using Google Analytics custom reports on referrals and downloads. App Invites is a smart service, so it can recommend to users who they should refer the app to, based on interactions and communication history on Google apps like Gmail and Hangouts.

Developers can also send actionable invite cards, which will embed an install link right into the SMS or email. The process also allows a quicker install flow, by bypassing the browser and linking straight into the Google Play store for Android-based installs. Additionally, users can get deep linked into a specific onboarding experience, where developers can offer custom discount codes, content or more to users as incentive for installing the app.

The entire process is designed to make the task of designing a referral system easier for app developers and more intuitive for users. Google's entire announcement can be found on the firm's official Google Developers blog.