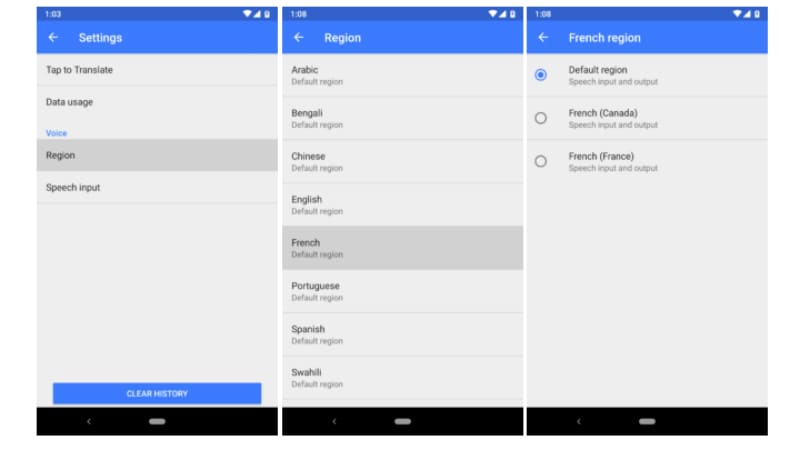 On Android, Google Translate is reported to soon retire the SMS translation feature

Google Translate, the tech giant’s popular language translation service, is getting new features and design changes on Android, iOS, and Web. Starting off with iOS, the app now gets support for regional speech input and output in English, Bengali, French, and Spanish. On Android, the Translate app is reported to soon retire the SMS translation feature, and thanks to a teardown, the same new regional speech capabilities were also spotted. Lastly, on Web, Google Translate will get Material Design 2, as tested on the Google Chrome and Mozilla Firefox browsers.

Version 5.24 of the Google Translate app for iOS on the App Store brings new regional options for speech input and output in English for US, UK, Australian, and Indian accents; Bengali for Bangladeshi and Indian accents, French for France and Canada; and Spanish for Mexico and Spain. This will enable foreign users to understand pronunciations better in their preferred accent.

While only the version 5.23 of the Google Translate app on Google Play is available in a stable avatar currently, Android Police seems to have gotten hold of the upcoming v5.24 that features a message saying the SMS translation feature will be retired at some point in the future. Further, an APK teardown of the Android app tips that it will get regional speech input and output support, similar to the one on iOS, with an upcoming version - perhaps enabled as a server-side update. The app will support regional dialects of English, Bengali, French, and Spanish. Users can download the latest version of the app via APKMirror.

And, on Web, Google Translate is getting the new Material theme or Material Design 2. The new design brings a mobile-like interface with three round icons - History, Saved, and Community. Considering it is a server-side upgrade, it will roll out to users over the next few weeks. The refreshed Material Design is currently available on other Google apps like Google News, Gmail, Android Messages, Hangouts, Chrome Web store, Google support pages, and personal account page. This development was also first reported by Android Police.