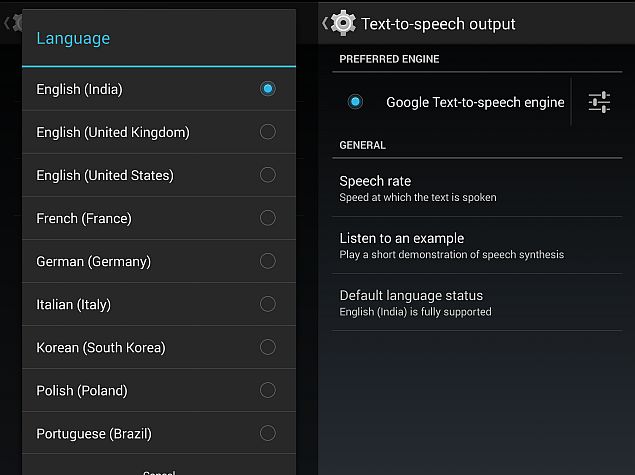 With the addition of these four languages, Google's Text-to-Speech app now supports a total of 13 languages. Users can download the updated app from Google Play and can change the settings by going through Settings > Language & Input > Text-to-Speech output on their devices. The update brings the app to version 3.1.3.1162895.

We spent some time with the updated Text-to-Speech app with the English (Indian) settings, and the results were somewhat decent, with a fairly accurate accent for speech synthesis.

To recall, the Google Text-to-Speech app is used for reading books, translating spoken feedback and other supported actions.

Back in March, Google rolled-out an update (v3.0) to its Text-to-Speech (TTS) app with some user interface tweaks and enhanced voice quality.

Google Text-to-Speech version 3.0 came with more natural sounding, high quality voice support based on the file size of the high quality voice downloads that jumped from roughly 6MB to more than 200MB. The TTS v3.0 update had also brought support for two new languages - Portuguese (Brazil) and Spanish (US).