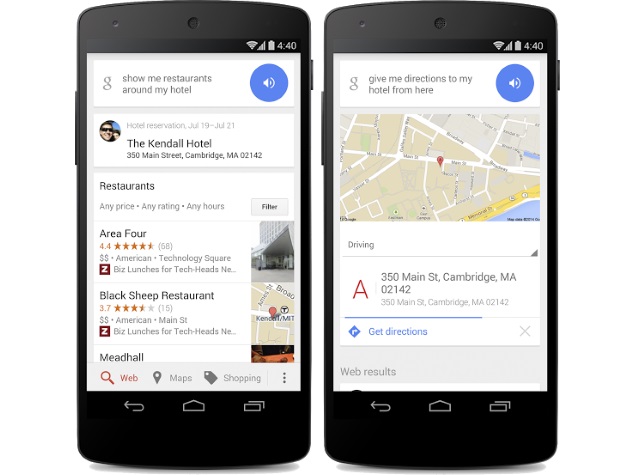 If you are travelling this summer and you often use Google's Search to find places to roam around and eat, then a newly-introduced feature might interest you. The search engine giant is now rolling out an update that will offer you details about places nearby your hotel.

Google announced the news on its Google+ page and said, "Travelling this summer? If your hotel confirmation is in your Gmail, you can now ask Google for things to do, eat or see to do nearby without the fuss looking up where you're staying."

The Mountain View giant clearly notes that for the feature to work, the user's hotel confirmation mail should be in the Gmail. The company further added that users can use the Google Search app for voice command searches such as "Show me restaurants around my hotel" or "Give me directions to my hotel from here."

The Google+ post said, "Tap the mic on the Google app and say "Show me restaurants around my hotel" or "Give me directions to my hotel from here." You'll be finding your way around like a local in no time."

Unfortunately, the company has not revealed that whether the feature is being rolled out via an app update or will be available automatically to users after Tuesday. The Search app on the India-specific Google Play store was last updated on July 7.

Earlier this month, the search giant updated its Search app for Android and iOS devices. The updated app indicated to users if a webpage would work properly on their mobile device or not.

Prior to this, Google also updated its Search app's voice recognition for Android and iOS to fix misinterpreted words with quick commands, which meant that if a query or command was misheard by Google Now, users could correct that particular word and the app would attempt to parse the command again. The feature was rolled out in a phased manner.

On Tuesday, Google was said to be testing a new Knowledge Graph search result, also referred to as 'interactive event timeline', that would generate timelines of certain search queries based on content derived from Wikipedia.