Google Search Can Now Be Asked to Roll a Die, Apart From Flip a Coin 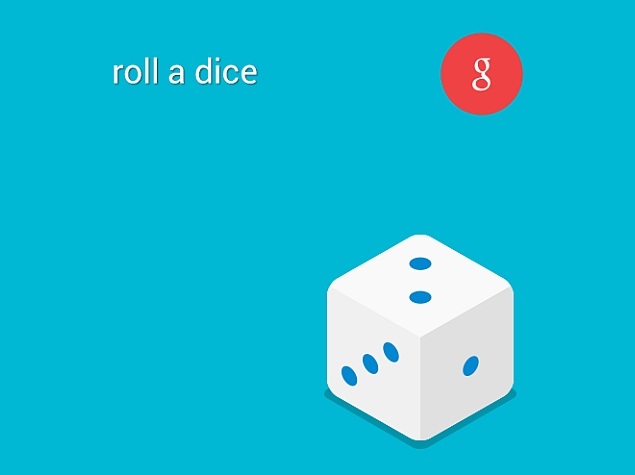 Users can now ask Google Search to roll a die on their Android smartphones and tablets, apart from their desktops, providing a quick and easy way to get a random result and take a chance. The feature is a follow-up to the 'flip a coin' voice command introduced last week.

To use the feature, users can say the 'OK Google' command (or visit the Search app or page) and ask Google Search to "roll a die", "roll dice", or a variation to see a small-duration graphic actually rolling a six-sided die on the screen, and returning a random result.

Google announced the feature on its Google+ account on Monday, posting a gif image of a die being rolled when given the same command.

As for the coin flipping feature, Google introduced it to Search last week l, letting users ask Google to "flip a coin" to once again get a random head or tails result.

"Korean BBQ or pizza? Interstellar or St. Vincent? So many questions in life can be decided with a quick coin flip. Save those quarters for laundry and parking meters-just say "Ok Google, flip a coin" and make those decisions in a snap," said Anantica Singh, Product Manager, Google Search in a company blog post last week.

Last month, Google, in an update to its Search app for Android, reportedly introduced a new bug that requires an additional step to set an alarm or timer with hands-free operation on some devices. The bug is reported to also remove hands-free support to set alarms or timers for some third-party apps, including Timely - which is now owned by Google.

Notably, Google also officially updated its Search app for Android and iOS platforms with the ability to show upcoming and past bills, dug out of users' Gmail accounts in October.