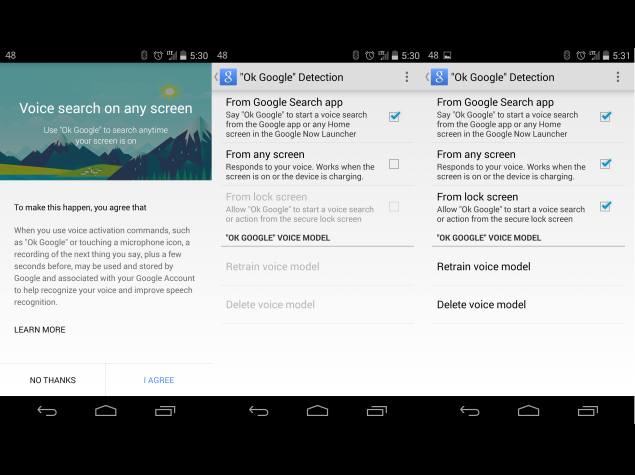 Google on Wednesday has reportedly started rolling out its "Ok Google" hotword detection feature to any Android UI screen, via an update to the Google Search app. It means just like the Motorola Moto X (Review | Pictures), all the Android 4.1 or higher devices will now be updated to detect the 'Ok Google' voice command from the any screen, including the lock screen.

The Google Search app was updated on Wednesday, but the feature seems to be rolling-out gradually to individual accounts, according to a report by Android Police, which lists the signed apk for the app. The site notes that even if the apk is installed, the feature will only be activated by Google on an individual basis.

Users can go to Google Now>Settings>Voice >Ok Google hotword detection, and check if the feature is rolled out to them or not. The menu will include detection 'From any screen' option, along with the existing 'From Google search app' (see above). Users will be able to further select if they want to use it 'From lock screen' or not. Also in order to register your voice for the first time, the user will need to say 'Ok Google' three times and it will set up the hotword detection.

Notably, the updated app on Google Play does not include the feature in its 'What's New' list. Along with the app being faster now, it lists the parking location card (in beta) feature that lets remembers where you have parked your car; the offline Google Now card feature which saves the cards to use in absence of internet connection; shop the recently searched products feature which tells you when the item is sold nearby, and store directory at a mall feature that gives the stores list of a mall if available.
Comments