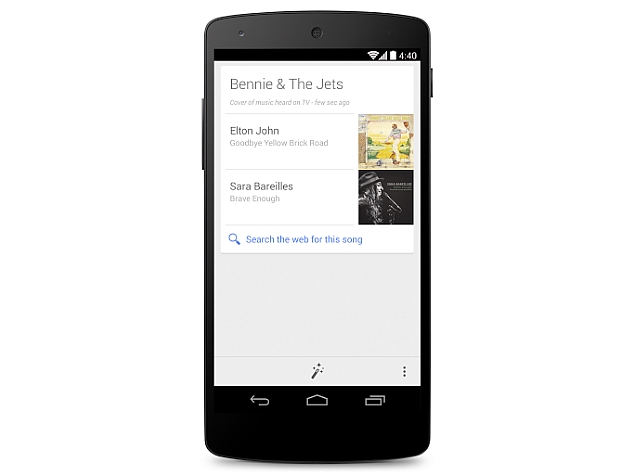 Google is not yet done with adding features to its Google Search app for Android, with a new feature announced shortly after the announcement of camera voice command feature on Thursday. The search giant's latest Google Search app feature lets users know relevant information about any song that's playing - similar to Shazam and SoundHound.

"So we're down to the Top 10 on #Idol . Whether you're tuning in for CJ's soulful country, Jena's piano power, or Caleb's rawk... if you happen to miss the name of one of the songs while watching, just tap the mic in your #GoogleSearch app (or say "Ok Google") and say "Listen to TV." You'll find out the title, artist and other cover versions," stated the post by Google on its Google+ account.

Much like the freshly announced camera voice-command feature for the Google Search app, this feature can also be accessed by tapping the mic icon in the Google Search app or widget, or by saying 'Ok Google', and then saying the voice command - 'Listen to TV'. The app will then listen to the playing music, recognize the song title via Google's boundless wealth of knowledge, and then give the relevant song information - such as its artist, album name and more.

The new Google Search feature is said to eliminate the extra hassle to download a dedicated widget and makes it easier to manage, as all this is wrapped-up in one single app. This feature will the Shazam and SoundHound music apps hard, as before this feature by Google, they have been the most popular apps available in the Google Play store offering the same functionality.

For now, the Google Search app on Play Store has not yet been updated, and doesn't yet feature the new camera and song recognition voice-commands. We can expect the updated Google Search app for Android to be rolled out globally soon.