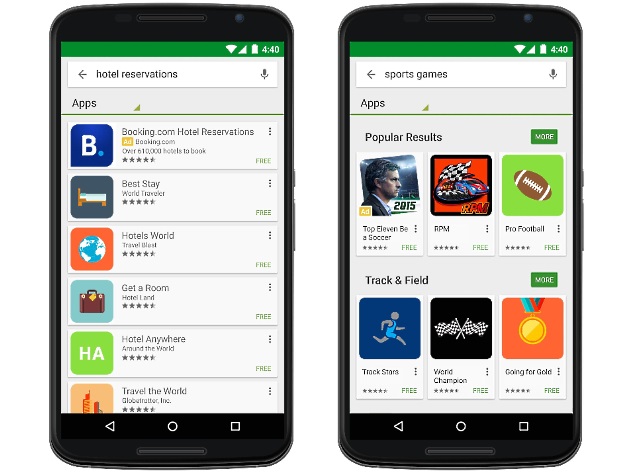 Google on Wednesday announced that paid or sponsored Search Ads will now be showing up in Google Play alongside rolling out new app promo tools for advertisers and developers.

Initially announced in February, the Search Ads will work just like how the ads work on Google Search, with the sponsored results clearly labelled as ads and placed above organic results. The pilot rollout earlier targeted a limited number of people to take feedback on the Search Ads in Google Play before the company announced the mass rollout.

The Mountain View firm clearly believes that the Search Ads can allow people to discover apps which they never installed and used. Google Play's search has often come under fire for not surfacing the apps that users are looking for, and now, with the association of specific keywords to throw up sponsored search results, search efficacy may improve.

Google named Booking.com and Nordeus as the companies that are already extending their app promotion strategy to include showing ads on Google Play.

The company alongside introduced 'Android First app opens', a new conversion tracking solution for developers and advertisers to measure when a user first opens an app after clicking on an ad and completing an Android app install. The new tool not only provides app conversion tracking across Search, Display and YouTube for developers and advertisers but also allow them to align the conversion volume seen in AdWords.

Google has listed some key partners including Tune, AppsFlyer, Kochava, Adjust and Apsalar with which the company is working for the First app opens.

"In a few weeks, Universal App Campaigns will make it even easier to promote your apps on Google Play and across all Google properties, including: Search, YouTube, the AdMob in-app network, and the 2M+ sites on the Google Display Network," adds Chatterjee.