It seems Google's Material Design makeover for its Play store could be the next big thing from the search giant along with Android L. We have seen the new design with the updated Google+, Google Docs, Sheets, and Slides applications.

The design theme of the Play store are based on the guidelines by Google known as 'Quantum Paper' internally codenamed as Material Design and showcased at Google's recently concluded I/O developers' conference.

According to information received by Android police, the "makeover of the Play Store is well under way." The team has also shared some in-progress version images, purportedly revealing the Material Design of the store for Android smartphones and tablets.

As seen above, the left screenshot of the app in Play Store is visually very different from the screenshot of the app with new material design on the right. The refreshed version uses larger images and album art in the background of a listing. There's more white space with the improved Roboto font, which Google had highlighted during the I/O keynote last month along with a number of changes inside of Android L, the next big release of Google's operating system for mobiles and tablets. 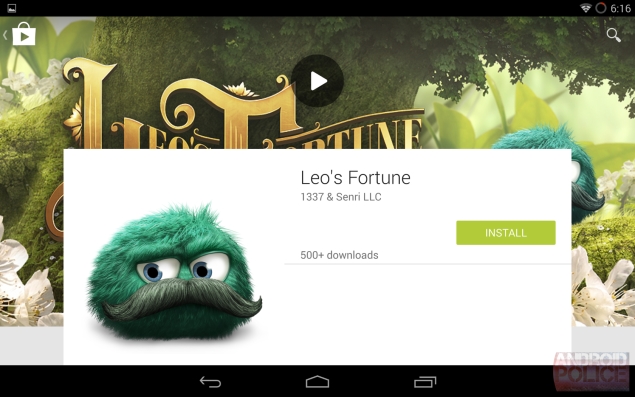 Other change from the purported screenshots appears to include new style layout of the app's description which can be expanded to full screen mode, along with the repositioned sharing button. which is now in a row below the review section. Also, the design of the review section will be more colourful and will add new iconography e.g. like the tiny flag for inappropriate content.

While the new possible design seems to be in-line with Google's guidelines of the Material Design, it's worth noting that the screenshots are of the pre-release version and this could differ from the final release expected this fall, likely along with Android L release.
Comments