Google Play Pass subscription service will take on Apple Arcade, which was announced in March.

Google Play Pass subscription service launch rumours are once again in the news. App and games purchases on smartphones have typically been one-time spends, giving the user life-long access to a particular app or game on the same account once they have shelled out the cost for it. However, Apple announced that it's looking to offer a new way to access premium apps and games with Apple Arcade, a subscription service that is set to be launched later this year. A new report now suggests that Google could be working on a similar subscription service called Google Play Pass. The service is said to be already in the testing phase.

Screenshots from an anonymous user sent to Android Police show that Google could be close to rolling out the Google Play Pass subscription service, which was first tipped to be in the works in October last year. The service isn't actively rolling out for all users, so it's likely being tested with a limited user base for the time being.

The Android Police report further elaborates that the Google Play Pass service could come with a free trial - mentioned to be 10 days in the screenshots. The price of the service is mentioned as $4.99 per month in the pictures, but this price could change when the service is officially launched. Pricing and content curation could also vary by country, so it's possible that India pricing won't match US or Europe pricing for the service.

The Google Play Pass screenshots show a number of premium apps that could be a part of the subscription service at launch, including Stardew Valley, Marvel Pinball, and Limbo. 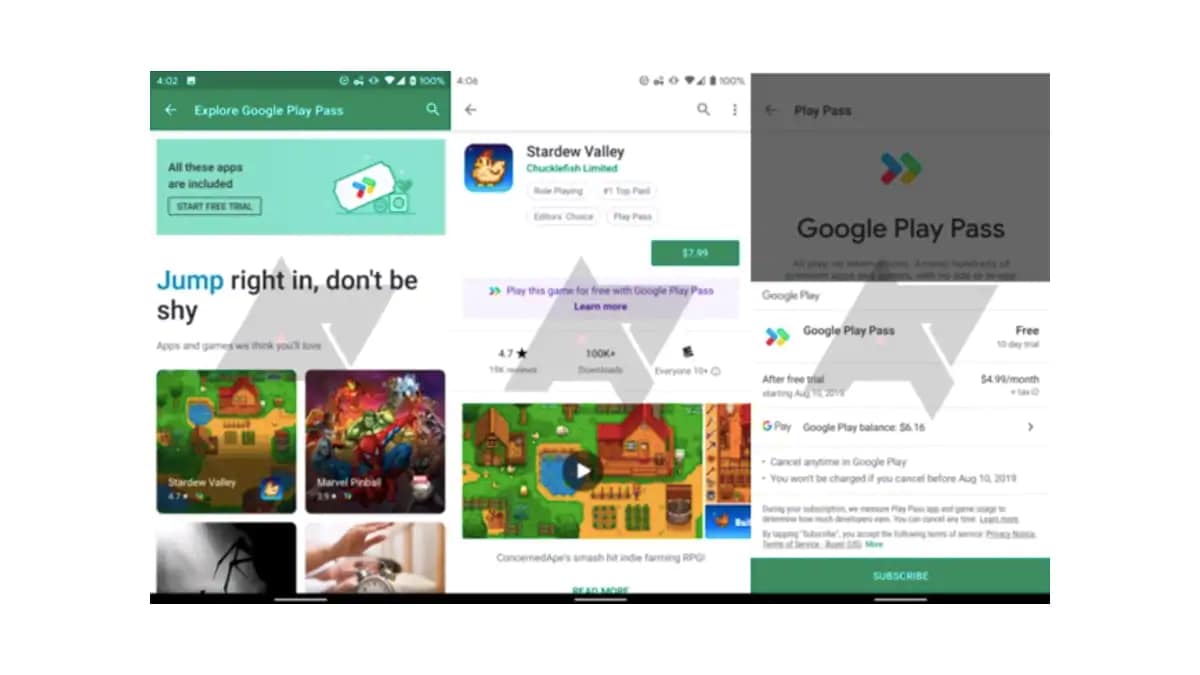 “Explore a curated catalog spanning puzzle games to premium music apps and everything in between. From action hits to puzzles and fitness trackers, with Google Play Pass you unlock access to hundreds of premium apps and games without ads, download fees or in-app purchases,” a screenshot reads.

The service is similar to Apple Arcade, which was announced earlier this year and will offer similar subscription access to games and apps. Google's push with this subscription service could be aimed at taking a larger share of global app purchase revenues, which continue to be dominated by Apple.

Further reading: Google Play, Google Play Pass, Android, Apps
Ali Pardiwala Email Ali
Ali Pardiwala writes about audio and video devices for Gadgets 360 out of Mumbai, and has covered the industry for a decade now. Ali is a Senior Reviewer for Gadgets 360, where he has regularly written about televisions, home entertainment, and mobile gaming as well. He is a firm believer in 4K and HDR on televisions, and believes that true wireless earphones are the future of the personal audio industry. Ali is available on Twitter as @AliusPardius and on email at alip@ndtv.com, so do send in ...More
OnePlus Beats Apple, Samsung in Premium Smartphone Segment in India: Counterpoint
2019 iPhone Models to Support Apple Pencil, Analyst Claims