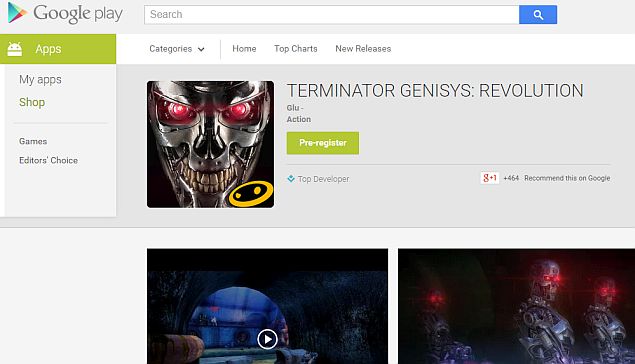 Google Play has started allowing publishers and developers to tag their apps for "pre-registration" on the app store ahead of official release.

The Pre-Register button allows interested consumers to get notifications of when the app or game is finally made available for download or to buy.

The Terminator Genisys: Revolution game's description notes, "The year is 2028 and humanity is on the brink of extinction. Help John Connor in the war to save the human race in the official game of the new movie Terminator Genisys. Escape from the Skynet prison camp and fight the machines in this action-packed sci-fi shooter!"

We can expect some upcoming new apps or anticipated game titles to arrive on the Google Play with a "Pre-Register" button to create hype ahead of the official release.

A recent report suggested that Google plans to give Android users more control over what information the apps they install can access.

If true, it would mean an Android user can choose to restrict what an app can access on their device or from the cloud, such as images, contacts, camera or even location. The report claimed that the announcement regarding the new privacy controls might come at the I/O 2015, the developer conference scheduled to kick off on May 28.