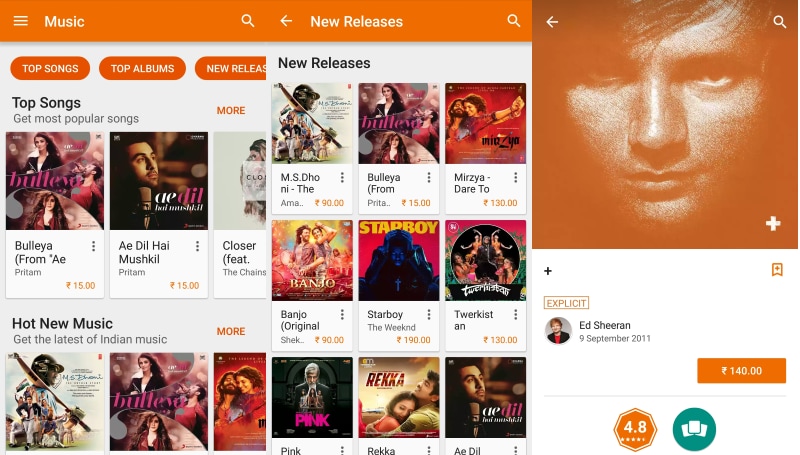 It has been a long time for the users in India waiting for Google to introduce its Play Music service in India. And the wait is finally over. Google has quietly opened its Play Music store in India, with songs and albums now available for purchase. The Play Music was rumoured to launch back in July but it didn't happen at that time. Notably, the subscription service - known as Google Play Music All Access - is not yet available in the country.

The news comes after the Google for India's event on Tuesday where the company launched a bunch of apps and new features suited for the Indian users. However, there is no official announcement by Google India to add to the same on its blog. With the new Play Music service, Google will enter the digital music market in India to compete with the likes of Apple's iTunes and Airtel's Wynk Music.

Google Play Music doesn't let you stream music as of now, with no Google Play All Access subscription plan, no radio, and podcasts services in India. You can only buy songs and albums individually on the app. With no support for streaming, Google may fall behind Apple Music, Saavn, and Gaana that currently occupy the streaming market in India.

Detailing on the pricing, Google Play Music hosts individual songs of the genres like Bollywood, regional, Indian Pop, and International starting Rs. 15 per song, while an entire album costs within the Rs. 100 - Rs. 200 range. You can preview the tracks and pay for them as per your suitability using your debit/ credit card, or with Google Play cards.

The Web version of Play Music is also live with a support for Google Chrome extension for desktops in case users want a player app. Interestingly, the Play Music app on iOS didn't let us successfully sign into the app, suggesting the service might roll out on iOS platform later. Users can also upload music via Google Play Music on the web - users will be required to download the Music Manager app, which then allows you to upload files from your computer, or playlists via iTunes and the Windows Media player. Users will then be able to listen to the uploaded music anywhere once they sign into the Google Play Music service, whether on Android or the Web.