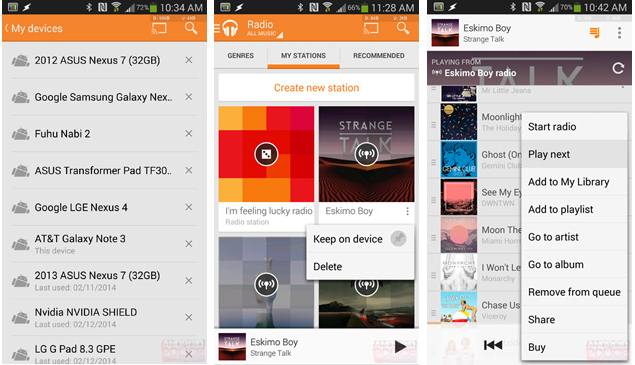 Google has started rolling out an update for Google Play Music which brings along offline radio caching with few new features and bug fixes. The update will gradually roll out to the Google Play store.

The Google Play Music 5.4 update would let you pin whole stations to your device for offline playback. It pre-caches an entire radio station once you are connected to Internet, which means you can listen to fresh music even if you are not connected to the Internet. You will simply have to navigate to 'My Stations' and tap on the menu button next to a radio station to see the 'Keep on device' option, which is similar to the earlier available option for albums, songs and playlists. The 'I'm Feeling Lucky' radio station which can't be pre-cached.

In order to access Google Play Music's radio stations of course, one will have to pay for an All Access streaming subscription.

Google has also added a "Play Next" button to songs and albums, so, now users can play stuff they want without clearing the playlist or dragging stuff around. The update has also added the "Refresh Music" option in this.

The Google Play Music 5.4 update also brings few other new features, like the ability to manage and de-authorise devices directly from the app, via the new 'My Devices' interface.

Previously Play Music had a 10 device limitation, which once reached then you couldn't play music on any more devices until you de-authorised a few. To remove those devices you previously had to go directly to the Google Play music website.

The update additionally brings few bug fixes and will be gradually rolled out. But, if you do not want to wait then an APK is available for download (requires third-party app installation) via Android Police.
Comments