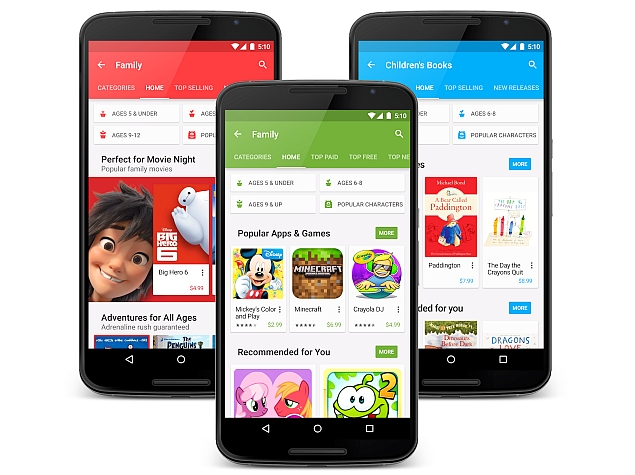 Besides talking about Android M and other updates at the Google I/O 2015 keynote event, the company revealed the Google Play app install numbers for the past year - indicating a constant growth of the Android platform worldwide. The firm also introduced the anticipated new 'Family' sections on the Google Play store.

At the event, Google claimed that in past 12 months it saw over 50 billion app installs. It added that currently there are one billion active users worldwide. It was also mentioned that while the numbers are overwhelming and suggest a tremendous growth, the areas including India, Southeast Asia, and the Middle East saw growth twice as fast as the remaining parts of the world.

In addition, Google Play Games saw 180 million new users in the past six months. The firm said that it is rolling out new developer tools, which are likely to bump-up the app installation numbers.

The search giant also introduced new Family sections for Google Play, visible after clicking the new Family button in the Apps, Games, Movies & TV sections, and as the Children's Books section for the Books section. Inside these section, parents can further filter apps and content based on age ratings - such as apps for kids aged 9-12 and for kids aged 6-8 - seen as Family star badges or labels that include details about whether the app is ad-supported. Users also get to see family-filtered top charts, recommendations, and even searches if navigating from family homepages.

Google has also updated the parental controls, so they can restrict child's access to mature content, downloads or purchases. The Family sections and new parental controls will be rolled out globally over the next couple of weeks. Also new, is a feature that lets kids browse Google Play for content based around their favourite cartoon and children's show characters, such as Spongebob Squarepants and Elmo.

Google says the new Family sections includes such popular content as new content such as Crayola DJ, Cutie Patootie, Thomas's Musical Day for Percy, and Doozers-Play Along Stories, as per the blog post by the Eunice Kim, Product Manager Google Play.