Google Photos, the photo storage app on Android and iOS, is getting newer video editing capabilities. An update to the Photos app is rolling out on Android smartphones and it includes new more powerful movie editor. The feature was earlier available on Google Photos for iOS, which was reportedly based on the Clips app developed by Fly Labs and acquired by Google three years ago. Separately, Google has also added some adjustments to its Files Go app, including a navigation drawer.

The Google Photos app on Android now has a movie editing tool that will help users to simultaneously play with multiple clips. The latest update brings a simpler design and more advanced editing options, making it a powerful app now. First spotted by Android Police, the new feature is available in the Google Photos app version 3.18.0.192689168. Interestingly, the report says that once a movie is created with the new editor, it works in the older versions of the app as well. Notably, the redesigned feature can only be applied to creations as editing regular video clips on a smartphone is still showing the older user interface.

One of the major changes in the latest version of Google Photos app for Android is a white background that has now replaced the old dark theme. Also, Google has moved the preview screen from the middle of the layout to the top of the screen. Right below, users can see clips and other media files are stacked with indicators that show the exact parts that are included in the main video. The design appears to be similar to several desktop video editing tools.

Also included in the latest update are other features such as the ability to long press to drag a clip to a new location for easy replacement. Users also get options like moving clips up and down in the timeline, showing or hiding an unused portion of a clip, muting audio, inserting new clips, duplicating a clip or removing a clip altogether.

While the addition of new features is a step further for the Google Photos app, it still lacks a few features such as themes, flip or rotate a clip, and adding text to videos. To avail the new video editing tools you can now download the latest version of Google Photos via Google Play.

Coming to the Files Go app, Google has added some new functionalities to the smart file manager. The latest update includes a move to a navigation drawer and a few more changes. While the older app had a three-dot menu with 'Settings' and 'Help & feedback' options to choose from, the new version shows a hamburger menu on the left. The two options have been placed in the new menu and the word 'Storage' has been changed to 'Clean'. The changes were first spotted by Android Police. 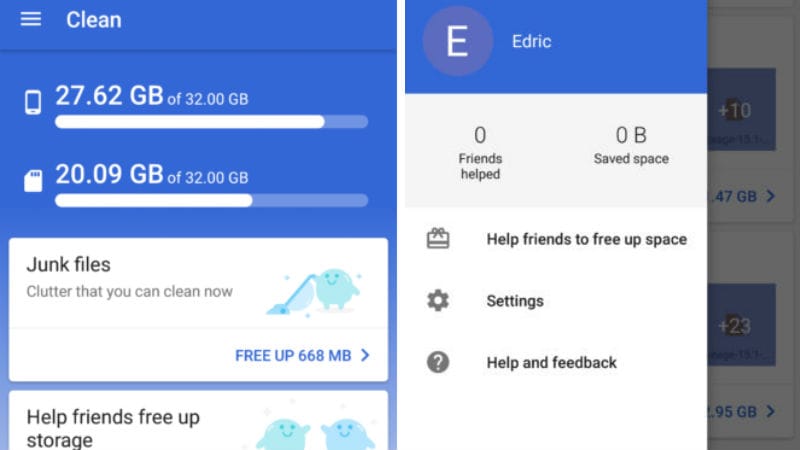 In the navigation drawer, Google has added other features as well including to counters. One of the counters is for the number of friends a user has helped via 'Help friends to free up space' button and the other counter is for calculating how much space a user has saved by clearing files. You can download the latest version of the Files Go app via Google Play store, and a Files Go APK is also available for those who can't access the updated app.