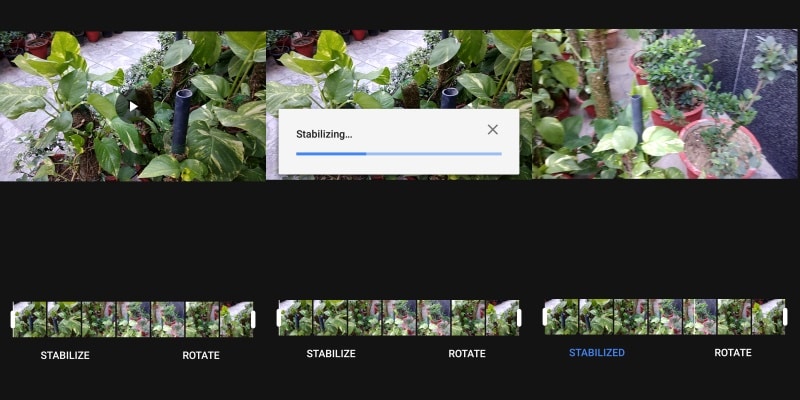 Google Photos has been there for a long time on both the Android and iOS platform but there was no video stabilisation feature available in it. Google had made an announcement in August last year that it will implement video stabilisation to its Photos app, and the feature is now rolling out as a part of an update to Photos v2.13 on Android. Apart from this, an APK teardown of the latest Photos app reveals that there could be new sharing options especially integrating Google+.

Starting with the new and visible feature in the Photos v2.13 app on Android, the video stabilisation add-on. We tested the feature on our phone, and it's working smoothly. However, there is no official changelog available on the app's Play store listing, or Google Photos' blog for that matter.

To begin with, using this feature is pretty straightforward. Inside the Photos app, open any video stored on your phone or from the cloud and tap the pencil symbol, which serves as the edit icon. After that you'll see the Stabilize option just below the video on the left side. Tap on it and it will start processing your video. The time taken to stabilise the video depends on the video's size, framerate, and processing capability of your device. Once the stabilisation process is complete, you can watch the video right there. You can undo/ toggle the stabilisation on your video by tapping the blue Stabilized button. This way you will be able to compare the changes in your video.

Additionally, in a teardown of the Photos v2.13 APK file run by Android Police's Cody Toombs, we have got some potential revelations of Google's future plans for its standalone photo app. In 2015, Google had segregated the cloud storage solution for photos out of Google+ into the presently available Photos app. After that, some major photo sharing features like photo-album sharing were also ripped off, leaving users to make slightly more efforts to get the once-convenient photo-album sharing part done. Now, it looks likely to change with future updates in Photos app.

The teardown has spilled some code chunks that describe a few strings of functions like creating circles, adding people to them, and following people and pages, which look identical to the ones in Google+. However, Toombs has said that these could just be some strings that coincidentally match up with the familiar strings found in the Google+ app. Besides, none of the codes actually point to features specific to photo-sharing but circle-sharing. Conclusively, it is doubtful if there's any actual functionality to add a feature directly related to Google+.

In similar news from some time ago, while tearing down the APK file Google Photos v1.26, Android Police had found a 'faster sharing' feature that led them to suspect if there's any other method still left as fast as what Android is already using. Later when the official rollout of the updated version happened, the 'faster sharing' feature turned out to be a feature of library called SendKit, which was an in-app list of your contacts that you could share to via an email or SMS.

Anyway, it will be interesting to see what Google has up its sleeves that once again ties Google Photos to its forgotten social network Google+.

As Samsung's Profit Surges, Some Investors Worry About Peaking Growth