Google Photos is now available as a Progressive Web App (PWA). With the latest development, you can add Google Photos to the home screen of your Android device or desktop directly by visiting the Google Photos site from the Chrome browser. Google enabled PWAs by default on desktops with Chrome 67. Previously, Google Maps Go debuted as a PWA to help users get a list of mapping features without installing the native app. Twitter also last month brought a PWA of its Windows 10 app with features such as extended character limit and an Explore section.

As spotted by Intel developer Kenneth Rohde Christiansen, the Google Photos site has now transformed into a PWA. Features such as an offline mode haven't been provided on the PWA version. However, you can enable desktop notifications to receive real-time alerts from Google Photos. The PWA also has the option to let you view and remove your comments and messages on shared photos. Similarly, there is Google Assistant support to get an enhanced image storing experience - just in line with what was previously available on the Google Photos site.

Features such as a Share Target support and notifications for automated creations are also not available on the Google Photos PWA, as noted by Android Police. Nevertheless, Google is expected to enhance the experience over time.

As of Chrome 67, Google has enabled PWAs by default. This means you can easily add Google Photos to your desktop after visiting the Photos site. To add Google Photos, click the three dotted menu button from the top-right corner of your Chrome browser and then hit the "Install Google Photos..." option. In case the option is not appearing at your end even after installing the Chrome 67, you need enable the flag for PWAs manually by visiting chrome://flags/#enable-desktop-pwas. 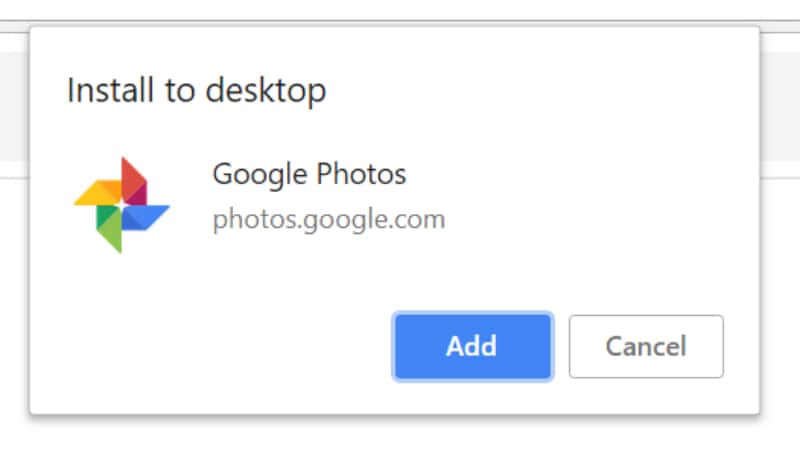 Android users can also add Google Photos to the home screen of their devices by visiting the Google Photos site. This helps especially if the Android device has limited storage.

Back in February, Microsoft had announced that it would bring Progressive Web Apps to Windows 10 through Microsoft Store. The Redmond giant also added support for PWAs to its Edge browser. Google and Mozilla had also taken a similar move to bring PWAs to the mainstream.