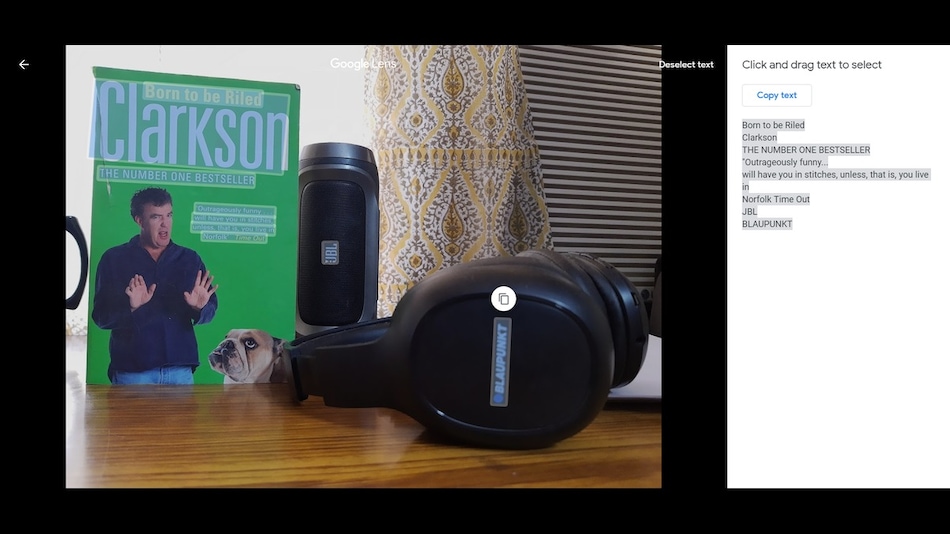 Google Lens is now available for Google Photos on desktop Web browsers. Google will be able to identify text through optical character recognition (OCR). The process of identifying text through Google Lens retains the same animation of pulsating dots all over the image. Last month, Google had integrated the Lens function into the Google Photos app on Android to scan saved images. Also, Google has recently adopted a new logo for its Lens app that symbolises its camera function better than before.

The new feature was first spotted by 9to5Google and was independently verified by Gadgets 360. When users open an image with a body of text on it, Google will show the option Copy text from image appearing on the left of the previously available options of share, edit, zoom, and other controls. Selecting the option triggers the familiar Google Lens animation of pulsating dots all over the image. Users can also choose which part of the text they want to analyse selecting the option Deselect text and selecting the by highlighting it with the cursor.

OCR is a very useful tool in analysing handwritten, typed, or printed text and converting it into machine-encoded text. This feature is one of Google Lens' most convenient features and it is the only Lens feature available on Google Photos for desktop Web. The feature doesn't recognise plants or monuments currently.

Earlier this year, Google Photos integrated Google Lens to scan already saved images directly from the gallery in Android devices. The tool is available to users at the bottom of the screen along with Share, Edit, and Delete options. Also, Google Photos for Web added the Explore tab in March. The new tab categorises photos under People, Places, and Things.