Uber Riders Can Now Pay for Their Rides Via Google Pay

Google has tied up with Uber to let Google Pay users seamlessly pay for their Uber rides in India. As an introductory offer, users can also avail up to Rs. 1,000 when they use Google Pay for 10 Uber rides. The latest move has expanded Google Pay, the mobile payments platform that got rebranded from Google Tez last month. This also makes the competition tougher for Paytm, which Uber had tied up with to provide users a payment option for Uber rides in the country. At the 2018 edition of the Google for India event last month, the search giant also announced that more than 22 million people in India are already using Google Pay on a monthly basis and over 1.2 million small businesses in India are using it to enable mobile payments.

To start using Google Pay for your Uber rides, you need to add Google Pay as a payment method on the Uber app. Go to the Payment section after tapping the hamburger icon from the top-left corner of your screen and then press the Add Payment Method option. Now, tap the Google Pay option and then enter your Google Pay UPI ID.

Notably, Google Pay as the new payment method is presently available only on the Uber app for Android devices. Google hasn't revealed any plans around the expansion of the Google Pay integration to other platforms, including iOS. 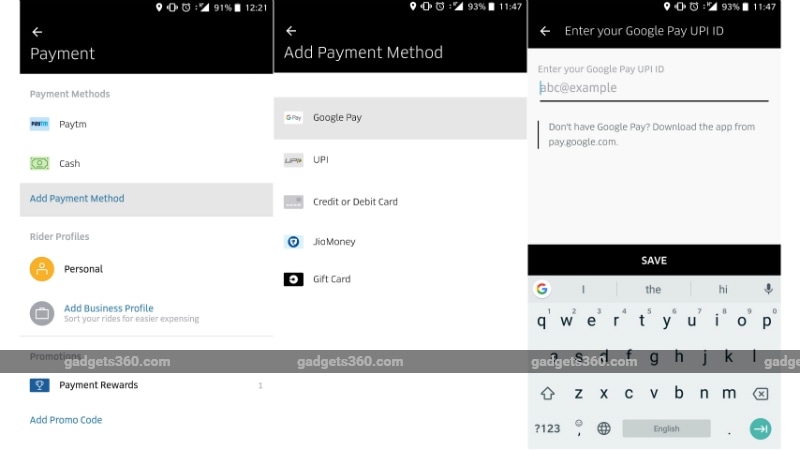 As we mentioned, Google rebranded Google Tez to Google Pay in India. Google also announced that it is aimed to empower 15,000 retail stores in the country to use Google Pay by this Diwali. The company is also set to partner with Federal Bank, HDFC Bank, ICICI Bank, and Kotak Mahindra Bank to offer pre-approved loans to users. The pre-approved loans will be given only to bank customers through the respective banks, whereas Google Pay will work as an intermediary.

Since the launch of Google Tez in September last year, the original brand of Google Pay in India, Google has enabled a total of 750 million transactions. The company also claimed that monthly BHIM UPI transactions have grown 14x since the launch of Google Tez. Online services such as FreshMenu, redBus, BookMyshow, and Goibibo are also offering Google Pay as a payment method. Similarly, in February, Google added support for utility bills. Xiaomi also tied by with Google to enable Google Tez as a payment source for buying products through the Mi.com site and Mi Store app.