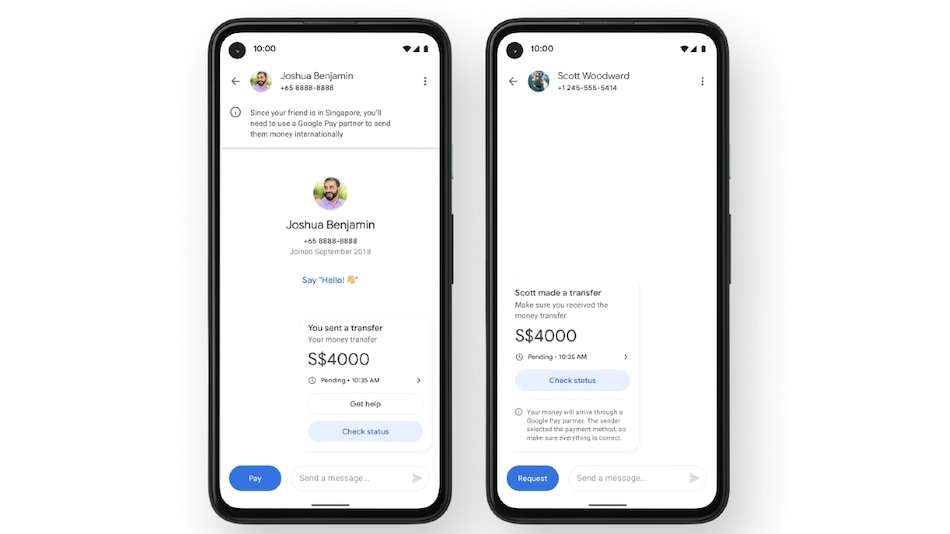 Google Pay will now let users in the US to send money to their friends and families in India and Singapore. This officially marks the tech giant's entry into the remittance services market. Google has partnered with Western Union and Wise to enable the new service via the Google Pay app. Although foreign transfers via Google Pay are initially limited to India and Singapore, the tech giant has plans to expand the service to about 280 countries globally later this year. Google Pay may be able to attract a large number of migrants in the US with the latest update.

Google said in a blog post that Western Union will offer unlimited free transfers when sending money with Google Pay until June 16. Wise, on the other hand, will offer the first transfer free for new customers on transfers up to $500 (roughly Rs. 36,700). However, Google has not yet declared the exact transfer fee that the service providers will charge after their initial free offerings.

It is important to point out that foreign transfers via Google Pay are limited to individual users. This means that the app does not allow you to send money from the US to any businesses in India or Singapore. Users in India are also not provided with the feature to send money to the US through the Google Pay app.

To send money through Google Pay, search for the Google Pay user who you want to send money to, tap the Pay button, and then select either Western Union or Wise. After that, tap Continue to see the exact amount that the recipient will receive. Tap Continue and choose how you want the recipient to receive the money — through UPI or via cash pickup.

Foreign remittances are growing rapidly with the growth of migrants in developed countries across the globe. India is one of the biggest overseas remittance receiver, though remittances to the country were projected to drop by nine percent to $76 billion (roughly Rs. 5,58,100 crores) in 2020 owing to the coronavirus pandemic and a global economic slowdown, according to the World Bank.