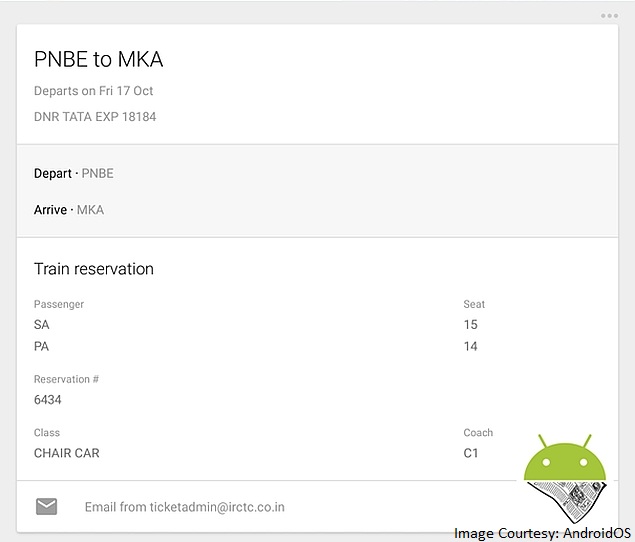 Google with another minor update to its Google Now service on the Google Search app, has reportedly started showing Indian train reservations as cards for Android users.

The Google Now service shows IRCTC (Indian Railway Catering and Tourism Corporation) reservations by tracking the user's Gmail account, as Google does for bill reminders, or hotels and flight bookings and more.

The reservation details show the starting and destination station along with the date of departure, train number, passenger seat number, reservation code and the coach number. Google has not yet made any official announcements for this particular feature. This might lead to a chance that the Mountain View-based tech firm might just be testing the service with limited users

The Google Now train reservation card was first reported by a user (via AndroidOS). In the field of transportation, Google last month started track flight prices for users based on their recent destinations and itinerary searches on Google and Google Flight Search (Google Flight service).

Google also officially updated its Search app for Android and iOS platforms with the ability to show upcoming and past bills, dug out of users' Gmail accounts earlier this month.

Back in July, search giant rolled out an update to the Google Now that will provided details for places nearby your hotel. Google had announced the news on its Google+ page and said, "Travelling this summer? If your hotel confirmation is in your Gmail, you can now ask Google for things to do, eat or see to do nearby without the fuss looking up where you're staying."