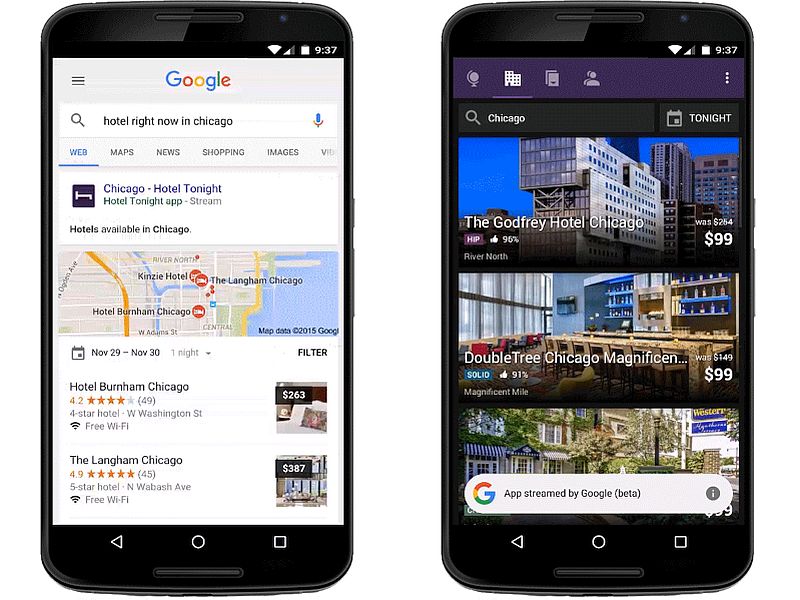 Google has finally unveiled its long-anticipated take on app streaming. Google's mobile searches on Android until now displayed information from apps that were indexed by the company to users who had the corresponding app installed. From now on, if Google finds in-app content contained to a mobile app that is not available in the smartphone, it will show the relevant content and in some cases, also offer users the option to stream the app. At this point, only a few app developers have partnered to make the "app first" content and app streaming facility available.

The company believes that the new feature will let users get content from apps even without installing them, and of course, it furthers Google's goal of getting more app installs by allowing users to try both paid and free apps.

Google has been indexing content in compatible apps for around two years now, starting with throwing up Google Now card and Google Play listing information, progressing to app installs ads and deep linking.

Google appears to have used technology from the app streaming startup it recently acquired - Agawi. Google silently acquired Agawi last year, and had confirmed the buyout after reports hit the Web earlier this year. Agawi's technology lets users easily preview apps or games by streaming them onto their handsets without installing or downloading them from Google Play. The company confirmed that it is currently testing the new cloud-based technology.

In a blog post, the search giant explained that it started indexing app content two year ago that gave results whether from an app or the Web.

The company explaining the app streaming notes that if a user needs a hotel in Chicago, his Google search results will now include results from the HotelTonight app.

For "app streaming", Google however points out that users will get the option to stream apps only when connected to a good Wi-Fi connection.

"With one tap on a "Stream" button next to the HotelTonight app result, you'll get a streamed version of the app, so that you can quickly and easily find what you need, and even complete a booking, just as if you were in the app itself. And if you like what you see, installing it is just a click away," explains Lin.

In other news, Google on Wednesday started rolling out an update to its iOS app that bumps the version to 10.0 and brings cosmetic changes. The update adds tweaks to Google's voice search as well as Google Now cards.