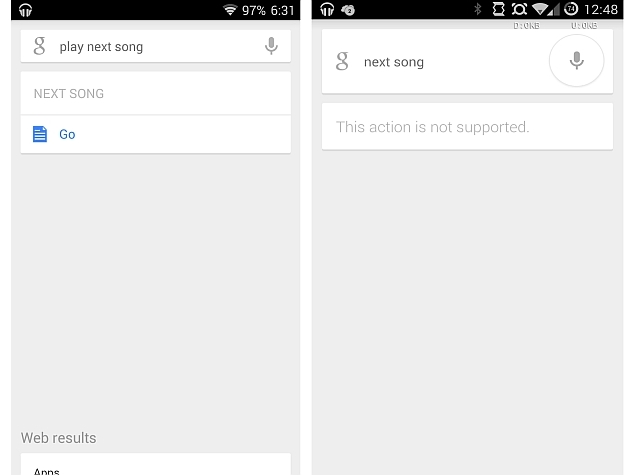 It looks like the search giant will soon enable its Google Now users to control media with their voice on Android devices, as the company is testing the feature in some regions already.

As tipped by users claiming to have received the media voice controls feature, users should be able to control music playback on their Android devices with voice commands like next track, stop music, etc., reports Android Police. Also, to check if the feature is available or not, users can try using one of the voice commands in Google Now.

The feature will come handy when the 'Ok Google' hotword detection becomes available to all users, then users will also be able to trigger the function from any screen. Presently the hotword detection feature seems to be rolling-out gradually to individual accounts. Users can go to Google Now>Settings>Voice >Ok Google hotword detection, and check if the feature is rolled out to them or not.

Google on Monday also updated its Play Music app for iOS to version 1.3.0.2190, bringing gapless playback, as well as the ability to download subscribed playlists and view current downloaded music.

With gapless playback, users can enjoy music back to back. The updated app also has improved "Listen now recommendations and the ability to dismiss them" along with bug fixing. The Google Play Music app for iOS is now available to download and it is compatible with iPhone, iPad, and iPod touch devices running iOS 7 or higher.
Comments