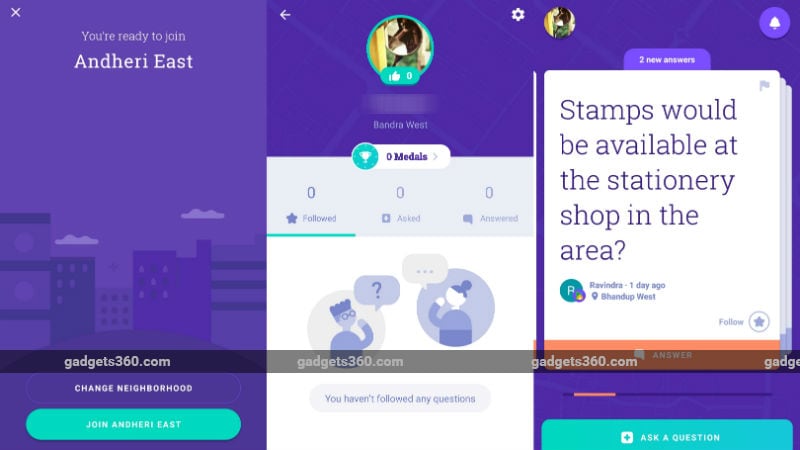 Google on Thursday unveiled a new social app called Neighbourly in India, at an event in Mumbai. The tech giant's Next Billion Users team has developed the app to help people source local information from their neighbours. With an increased focus on India, Google has been releasing several initiatives in the country, including Tez mobile payments app, Google Areo, Google Station, and YouTube Go. Now, it is adding the new local knowledge sharing app as well - for now, only for Android users in Mumbai.

The new Google Neighbourly app makes it easier for people in the same area to ask local questions and find reliable and relevant answers. Google believes that it is getting more difficult to get good answers to local questions because cities keep changing, including the people who live there. Caesar Sengupta, VP, Next Billion Users Team, says in a blog, "People nearby often have the exact information you need, but they are too busy these days to stop and chat on the street or in the park. And group chats keep getting bigger and noisier - and often fill up with those 'Good Morning' messages."

In the Neighbourly app, when users ask a question, and it's routed to the relevant neighbourhood experts who can help. Using Google's voice recognition, you can speak your question or answer into the app. Notably, it works in English and eight other Indian languages.

Also, you can share local expertise. Just swipe left and right through the questions and give answers. Interestingly, the app rewards the most helpful neighbours with badges and exclusive community events, similar to the Local Guides initiative on Google Maps.

The app also has safety features, meaning you can browse, ask, and answer questions without sharing personal information. Personal details like phone number, full name, and other contact information are kept private when you use Neighbourly, informed Google. Members who join the Neighbourly app also have to make something called the 'Neighbourly Promise' that requires them to "be civil and help improve the neighbourhood."

As of now, a beta version of the Neighbourly app for Android can be accessed in Mumbai. However, users located in other areas can join a waitlist pending expansion. If your smartphone is running Android 4.3 Jelly Bean or higher, you can download the app from the Google Play. The app is less than 7MB in size and works offline. It is worth noting that the app covers the local train perimeter, which means that neighbours are divided into areas such as Bandra West, Bandra East, Santacruz West, Santacruz East etc. Also, you can ask only extremely hyper-local questions, Google says. Sitting in Bandra, you can't ask questions about Colaba, and even if you change your location and ask, people from Bandra will answer it.

Meanwhile, Josh Woodward, Group Product Manager on Google's Next Billion Users team, said, "Google Search got started by connecting people to information on the web. With Neighbourly, we're finding new ways to move forward on Google's mission to organize the world's information and make it universally accessible and useful. In our research, we've found that most of life happens within a 1km radius of where you live, so we wanted to create a new experience for neighbours to benefit from the collective knowledge inside their neighbourhoods. And, when that happens, we hope neighbourhoods everywhere will start to feel even more neighbourly."