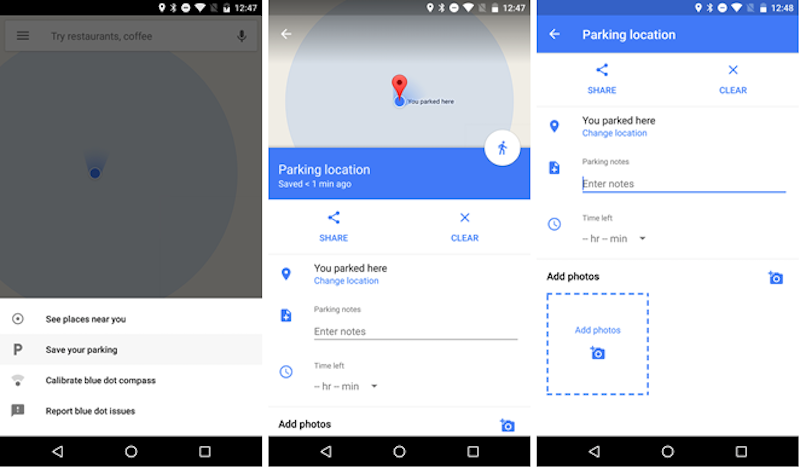 Google has recently been tweaking its apps to add useful functionalities. Just a while ago, the company added an advanced search feature to its Search engine to better suggest food recipes. Now, the search giant has added some handy new features to its popular Google Maps app to help you remember where you parked your car.

Google's latest beta update for Maps on Android (v9.49) now lets you add parking reminders, according to a report by Android Police. Tapping on the blue dot that represents your location brings up the option to add reminders. You can add notes or capture photos of where you've parked your car to help you find your way back, in case you ever forget. This feature comes especially handy when parking in a multi-level structure or the airport. For areas with a timed meter, the app lets you set the parking timer to remind you how much time you have left before the meter expires.

The new feature is a step more than what Apple offers with its own Maps app. Apple Maps on iOS 10 can automatically mark the location where you've left your car once your iPhone has been disconnected from the car's Bluetooth or CarPlay. The Maps app lets you edit the location of your car and add a note or a photo.

With Google's Maps' new feature, you'll have to manually add your parking details, which should be more accurate than having Google Now do it for you. Manually adding notes and photos will also allow you to better assess how you want to be reminded of your parking location. You can jot down some extra details like street name or pillar number or parking level to help you find your way to the car.

Additionally, Android Police reports that with he latest Google Maps beta update for Android, some users are reporting seeing a weather indicator for mass transit. The feature shows the weather at your current location and not the end destination. Interestingly, the feature doesn't seem to work for any other form of conveyance except trips through mass transit. Google is yet to officially confirm these new updates.

The new Google Maps features are still in beta phase as of now and should roll out to users soon, starting with Android. In the meanwhile, Android Police in its app teardown also spotted an upcoming feature in the code, which may allow for sorting of searches.