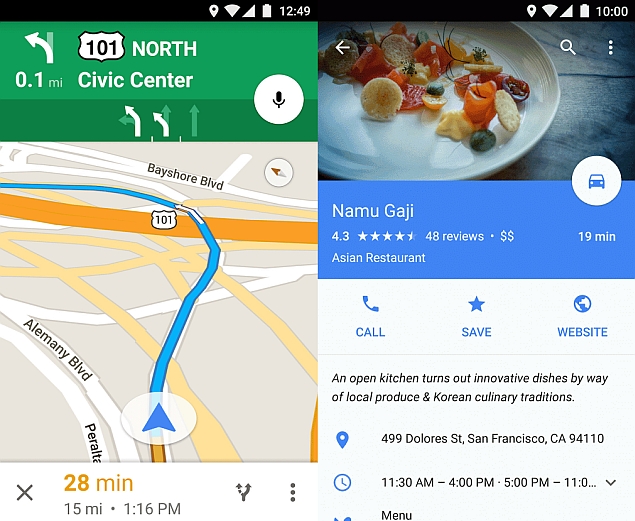 Google, besides announcing a slew of OS updates and features alongside Android M at the Google I/O 2015 keynote event, also said it would soon be bringing offline search to its Google Maps app. The app will also feature complete voice-based turn-by-turn navigation while in offline mode. Both features will be made available sometime later this year.

The new offline features announced for Google Maps are aimed mainly for "emerging markets" where mobile Internet coverage is spotty, and data charges expensive, as navigation via GPS is independent of mobile networks. In the past, Google had introduced offline rerouting during navigation, which would reroute users even if they lose their Internet connection while navigating. Now, the entire process of navigation can be done when offline. The offline features are also useful for those users who are travelling to less-connected spots. The features will also come handy for those who are searching for directions when travelling in underground metros or via flight.

The offline search feature would enable users to search for places and points of interest, with results including autocomplete suggestions as well as reviews, contact numbers, opening hours and other information. The Google I/O 2015 keynote event saw the feature being demoed on a handset on Airplane mode and it seemed to work seamlessly.

Google launched its offline maps feature in 2012. The feature at that time allowed users to avail offline functionality in over 150 countries and save up to six large metro areas. The search giant last week rolled out native Maps app for Android Wear devices, alongside translucent status bar and other features.

Finally, Google at I/O 2015 also announced updates for its Google Places API for iOS, bringing it on par with Android with such new features as adding a place picker, current device location, detailed place information, search autocomplete, the ability to add places to Google's Places database, and more.