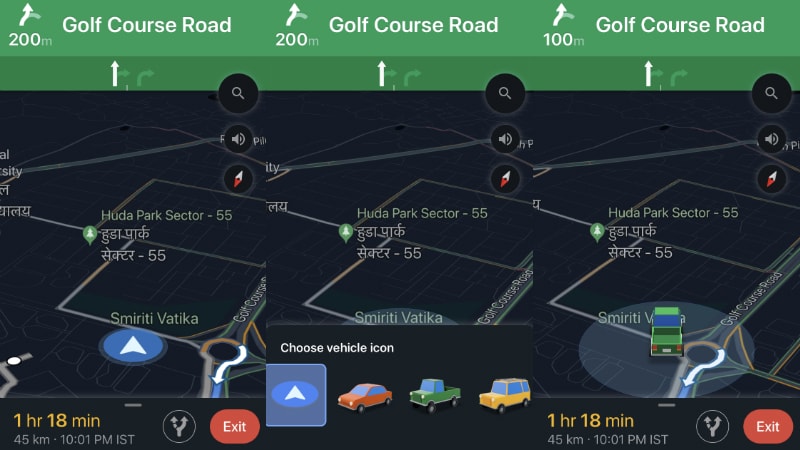 Google Maps has added a new feature that lets them swap the vehicle icons while they use the driving navigation feature to reach their destination. This is quite similar to the Mario Day (MAR10) Easter egg that Google Maps had, allowing the users to switch from the blue navigation arrow to Mario and his kart. This time around, however, the options are not as nostalgic, but still a fun way to spice up the drive as you drudge along your route.

The feature was announced in a tweet by Munish Dabas, a User Experience (UX) Engineer with the Google Maps team, who incidentally also announced the Mario Kart feature in the app. The new feature, however, is only available to Maps users on iOS for now, and not Android or desktops.

To use it, you just need to start the navigation and tap once on the blue-coloured navigation arrow. This will present to you three options: a red sedan, a green pickup truck, and a yellow minivan. Tap on any of the three and it will replace the navigation arrow and become your virtual partner on your journey. The icon will remain the same in future navigations too till you pick another car or the good ol’ arrow. This feature is available in India on iOS devices too.

Certainly a small tweak, but it is a nice way for Google Maps users to make their trips a little more fun. The app comes pre-installed on most, if not all, Android smartphones and is a favourite of iPhone users too. It has over a billion active users worldwide and is widely considered to be the most popular navigation tool globally.