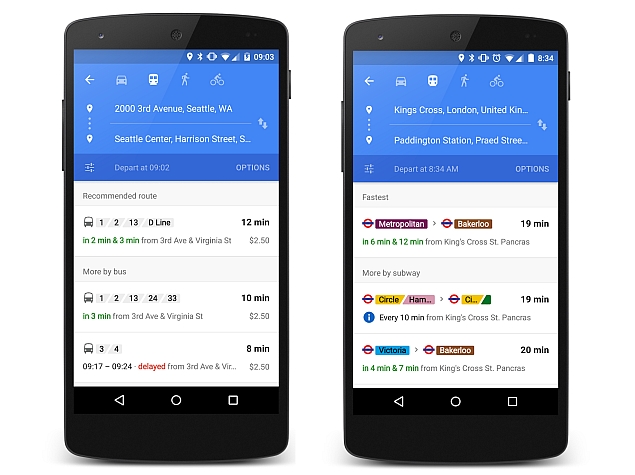 From Tuesday, users will see a slightly revamped interface that will let users know at a glance at how long they will have to wait, and alternative options. The new Google Maps' real-time transit info however is initially being rolled out to six regions, and will give live arrival timings of buses, trains, and subway systems. The feature will help users know when the next bus or metro would arrive in case they missed the previous one, and, also sends alerts for cancelled routes.

Google has brought on board over 25 new partners in the UK, the Netherlands, Budapest, Chicago, San Francisco, and Seattle for the initial rollout of real-time transit info, in addition to the over 100 partners it already has worldwide. Google has not yet detailed when it would roll out the real-time transit information to other regions in the world, or for the iOS app.

The search giant says it offers public transit information in 18,000 cities and towns in 64 countries across six continents. In addition, the transit feature by Google is being powered by the help of over 6,000 transit authorities, which cover 2.5 million train stations, bus stops and ferry terminals across the globe.

The Mountain View firm at Google I/O 2015 recently said it would soon be bringing offline search to its Google Maps app. The app will also feature complete voice-based turn-by-turn navigation while in offline mode. Both features will be made available sometime later this year. The new offline features announced for Google Maps are aimed mainly for "emerging markets" where mobile Internet coverage is spotty, and data charges expensive, as navigation via GPS is independent of mobile networks.